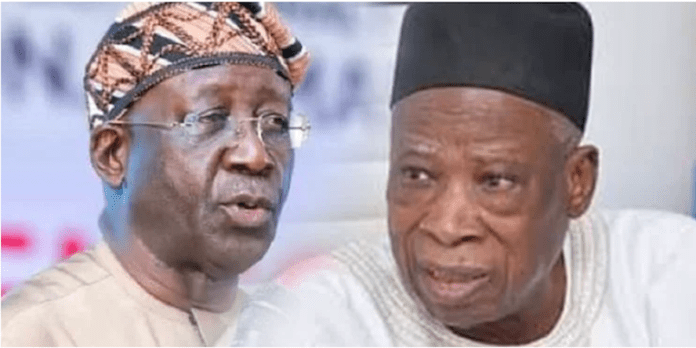 The People’s Democratic Party has pointed accusing fingers at the ruling All Progressives Congress for sending thugs to attack opposition party campaigns, thereby violating the peace accord signed by the 18 presidential candidates and chairmen of political parties.

The peace accord ceremony which took place on September 29, in Abuja by the National Peace Committee, led by former Head of State, General Abdusalami Abubakar, was aimed at making the party chairmen and candidates commit themselves to peaceful campaigns, and pledge to play the game by the rules ahead of the 2023 elections.

Conspicuously absent at the event however, was the candidate of the APC, Bola Ahmed Tinubu who was represented by his running mate and former governor of Borno State, Kashim Shettima. Tinubu’s absence attracted worries that his commitment to peaceful election won’t be taken seriously.

Also, candidates and spokespersons of the major political offices have been insulting one another, while state offices of the Independent National Electoral Commission like that in Ogun and Osun States, were torched, destroying many election materials.

The PDP reported an attack on its campaign by the Kaduna State Government, alleging that the APC, working through the Federal Ministry of Youths and Sports, denied the party the right to use the Ahmadu Bello Stadium, on the grounds that it was under renovation.

“However, a physical tour of the stadium has revealed that there’s no renovation work ongoing either on the main bowl of the stadium or its adjoining structures. This is even as the same facility was used for the 2022 Eid-el-Maulud prayers just last Monday,” the leader of the main opposition party in the state, Hassan Hyat disclosed in a statement.

Supporters of the PDP also in Zamfara State in October alleged that they were attacked by thugs recruited by the ruling party in the state. But the allegation was refuted by the APC, which accused that it was the opposition party that attacked its members.

The Zamfara police command disclosed that one person was killed, while 18 others sustained injuries following a clash by two youth groups in the state. According to the command, the groups involved in the clash are suspected to be supporters of the two dominant parties, the APC and PDP, in the state. Recently, hoodlums believed to be political thugs, attacked the Labour Party political meeting in Aninri, Awgu, Oji River, and at Igboeze North local government areas all in Enugu State.

At Umuida, Enugu-Ezike, in the Igbo-Eze North local government area of Enugu State, several vehicles belonging to the party members were burnt which made it the fourth time hoodlums attacked meetings called by the party in the state.

He alleged that the incident was carried out by armed thugs “sponsored by the disconcerted All Progressives Congress (APC),” as they had information about how agents of certain APC leaders mobilized hoodlums to escalate violence.

Worried about the sad development and in an urgent move to prevent the collapse of the peace accord, the National Peace Committee, in a press release on November 15, raised concerns over infractions being committed by candidates of political parties and their spokesmen in the ongoing electioneering activities.

The Committee urged all the candidates to put their spokespersons and representatives and their parties to order in the public media, and called on the security agencies to enforce the law with the understanding that everyone would be held accountable for their actions, no matter their status.

“Aggressive and abusive language only diminishes the integrity of the individuals, their candidates and their parties. Nigerians should be ready to punish instigators of violence by isolating them or their candidates”

The statement read: “Nigerians are genuinely concerned, troubled and disappointed by the conduct and attitude of some of the political actors in the last few weeks. Nigerians have been fed a menu of intemperate language, intimidation and outright violence in the field of the campaigns.

“It is evident that some of our actors have not learnt any lessons from the past. There is an increasing tone of desperation, if not incitement, among some of the contestants and members of their parties. Intra and inter party wrangling still persist, with occasions of violence. In desperation, some selfish political actors use these strategies to pursue their frivolous ambitions in the courts.

“We call on all the candidates to rein in their spokespersons and those who claim to represent them and their parties in the public media. All candidates will be held responsible for what is said on their behalf or of their party.

“Aggressive and abusive language only diminishes the integrity of the individuals, their candidates and their parties. Nigerians should be ready to punish instigators of violence by isolating them or their candidates.

“We call on the federal and state governments to ensure a level playing field for all parties in the course of the campaigns. Access to federal or state facilities must be open to all candidates as long as they meet their financial and other commitments to using the facilities.

“It is morally wrong to abuse the power of incumbency by subverting the efforts of those who are in opposition to the status quo. Parties and citizens do not lose their rights, because they are opposed to the party in power. All citizens are above political parties.

“We call on the law enforcement agencies to enforce the law with the understanding that everyone will be held accountable for their actions, no matter their status. We wish to call on the media to remain focused in managing information. Social media is with us and it can be a tool for good if only we decide to use it for peaceful purposes.”

“Access to federal or state facilities must be open to all candidates as long as they meet their financial and other commitments to using the facilities,” they say, and add, “It is morally wrong to abuse the power of incumbency by subverting the efforts of those who are in opposition to the status quo.”

On his part, the Inspector General of Police, Usman Alkali Baba accused some governors of influencing political violence ahead of the 2023 elections.

He said, “In so doing, they deploy their powers and influences to either prevent the mounting of campaign billboards or pull them down, while also denying political opponents of spaces to undertake their campaigns or peaceful political congregations in contravention of the provisions of the Electoral Act 2022.”

The IGP said the force was putting in place measures to combat all forms of political violence ahead of the election season. According to him, intelligence activity had been heightened, and increased deployment of security teams to all INEC assets and facilities nationwide, while promising to arrest and prosecute persons found to have perpetuated electoral violence.

Spokesman of the PDP Presidential Campaign Organisation, Charles Aniagwu stated that their members have been urged by the party’s leadership to maintain utmost respect for every candidate and to make sure they run the election and campaign based on issues. He however slammed the APC for their continued unprovoked utterances to the opposition both by its candidate and chieftains.

Aniagwu said, “We’ve continued to emphasize the need for the issues to remain in the front burner but it’s most unfortunate that there are some individuals who continued to use vulgar languages, have lack of respect for fellow Nigerians and most of them are in the ruling APC, including their presidential candidate and running mate.

“When they talk, they use languages and adjectives that do not depict the position that they’ve attained, both in the past and in the present. It’s either they are describing people as crickets or fishes or with names that you don’t even imagine will come out from persons of their caliber.

Aniagwu also accused the APC of hiring hoodlums to attack Atiku’s campaigns in some states saying, “In Kaduna, the people who attacked us did not hide it that they had sympathy for the ruling APC. When we also went to Borno, those who also attacked us did not also hide that they had sympathy for the APC. As per other political parties, I am not in the position to determine who attacked them.

“As a Nigerian, we must take time to advise our governors across political parties to know that the powers they have at the moment are transient. So when you promulgate policies or orders that try to strangulate the political space that cannot be said to be promoting peace or advancing the course of democracy.

Speaking on what would be a well-deserved punishment for party candidates and members who perpetuate political violence, Aniagwu said, “For you to even take somebody to court, you must first, have a law. You don’t take people to court just because you are angry with what they did. You must be able to ascertain that this person offended certain aspects of the law before you can proceed. You must first look at the law as to what constitutes an electoral offence.

“The first thing is to talk to our people to maintain a level of decorum. Once that is done, I will assume that the other relevant bodies should be able to carry out their responsibilities as assigned to them by the Nigerian laws, either by the constitution or the ones passed by the National Assembly.

He expressed confidence in the IGP to address the situation.

He said, “I believe that the IGP was sincere in his caution, I hope the police will enforce the rules when necessary with a view to having a much saner society. We need our society to be safe. We don’t want people to turn this nation upside down over the election because people are traumatized by the very abysmal performance of the ruling party. For politicians to, because of elections, begin to do things (campaign violence), that will further worsen the state of affairs in this country. This will be unfair to our country and to our people,” the spokesman appealed.