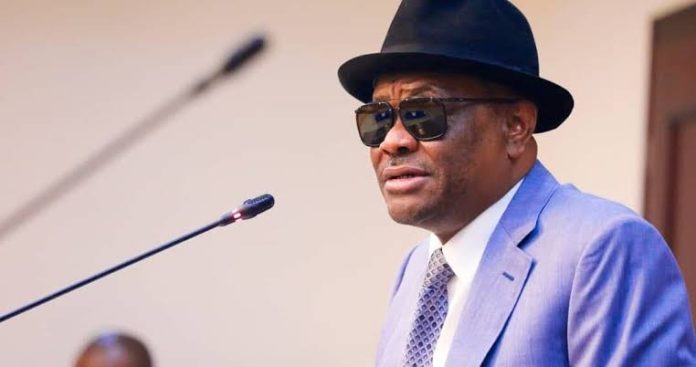 The main opposition Peoples Democratic Party has attacked Rivers State Governor, Nyesom Wike, accusing him of being the architect of the crisis currently rocking the party.

Speaking on a national television on Saturday, PDP’s Presidential Campaign Spokesman, Charles Aniagwu, accused Wike of masterminding the opening of the party’s presidential contest as against popular wish of micro zoning it to the South-East.

Aniagwu said Wike influenced the zoning committee headed by his friend and ally, Benue Governor, Samuel Ortom, to open the contest thinking he could muscle everyone to win.

Aniagwu who is also Commissioner for information in Delta said the ongoing crisis in the party was caused by Wike’s inordinate ambition to be President.

According to him, Wike’s anger at Atiku Abubakar is misplaced because his friend Samuel Ortom, was the chairman of PDP’s zoning committee just before the primary election was conducted and it was not Atiku who made it open for people to just go and contest but Ortom.

“In our quest for peace we have allowed the danger of the single story to persist. When the party set up a Zoning Committee it was headed by Governor Samuel Ortom of Benue and a member of the G-5 Governors.

“The Committee threw the ticket open for the best to emerge and Atiku Abubakar was considered the most qualified to lead Nigeria’s rescue and rebuilding mission.

“Let me now give you a hint, when the issue of zoning was discussed, you know that Ortom was the chairman of the zoning committee.

“Atiku Abubakar was interested in micro zoning it to the South East but it was the same Nyesom Wike that frustrated it because he wanted to contest.

“It was not Atiku that made the zoning open to people to just go and contest. In this case, there was a contest between the South and the North, and Atiku was considered by members of the party as the man capable of leading Nigerians out of the woods.

“I think often times we undermine the value of our prayers as Nigerians. From the actions of Wike, you will know that the prayers of Nigerians are working, because if in just Rivers, you are subjecting everybody to the kind of torture we are seeing which we never saw under military rule, imagine if he is in charge of the military.”

On calls for disciplinary measures against the ‘rebel’ governors, Aniagwu said the party was taking its time to ensure that all avenues for peace and compromise were explored.

“I know many people are wondering why the party is keeping quiet and neglecting the actions of Gov. Wike and others. This is because the party wants to exhaust all avenues of ensuring that these individuals realize that the party have been able to bring them up to speed.

“Without the Peoples Democratic Party (PDP); these individuals that are creating these crisis, where will they be? So when individuals begin to progress along this line and think that the rest of us don’t matter, you begin to wonder what their calculation is in any case”.

He said the party would continue to appeal to the G-5 governors to return home and join hands in the rescue mission project.

“We do hope that the G-5 Governors return home but while we await their return we will continue to engage Nigerians because that is where the power resides.

“Our Presidential candidate is very busy interfacing with Nigerians and we will continue to plead with Wike and accord him the respect he deserves as a governor and a great leader in our party.

“The very disturbing economic and security situation in the country is enough for any leader to sheathe his sword and help in taking decisions that can help the country to navigate through the very murky waters.

“That a man suffered defeat in a party primary that was very creditably organized, is one thing to which we don’t understand the extent to which he is taking this fight,” Aniagwu stated.

On Atiku’s meetings with Nigerians, Aniagwu said Atiku would not meet with people to undermine the party and its candidates across the country.