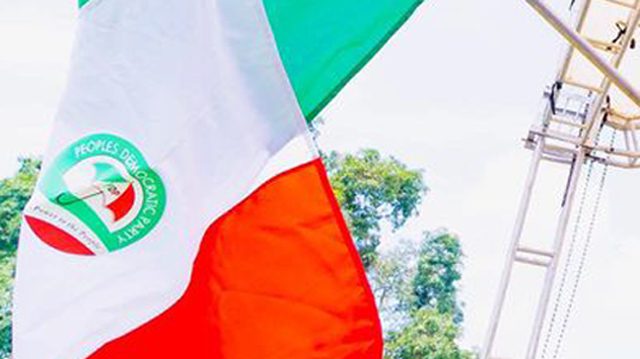 Contrary to the news making the rounds, it is not true that Rivers State Governor, Nyesom Wike, on Thursday ordered the removal of all PDP flags in the Government House, Port Harcourt.

An online news on Thursday had it that Wike allegedly gave the order to the CSO, who promptly carried it out.

But checks by The Point newspapers revealed that nothing of such happened.

Reacting to the news, a chieftain of the Peoples Democratic Party and three times Commissioner in various ministries in Rivers State, Emma Okah, said categorically that “it is not true.”

When pressed further, he said “Quote me. No such thing (happened).

There has been crisis of confidence buffeting the leading opposition party since Atiku picked Delta State Governor, Ifeanyi Okowa, as his running mate for the 2023 presidential election.

After the presidential primary election where Wike came second behind Atiku, a committee headed by Benue State Governor, Samuel Ortom, recommended Wike to be picked as the vice presidential candidate, but that recommendation was brushed aside by Atiku who went for Okowa.

Wike in turn has kept a low profile in all activities concerning PDP and instead has been enjoying the warmth and company of politicians from the ruling All Progressives Congress to the chagrin and consternation of PDP faithful.