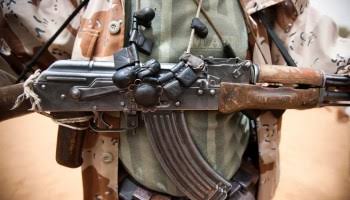 The Commissioner of Police in Rivers State Command, Okon Effiong, has ordered that any vigilante groups carrying firearms in any part of the state should be arrested.

Some vigilantes were said to have been seen in the Diobu area of Port Harcourt brandishing arms, including pump action rifles with various frightening uniforms.

The situation had raised concerns in the metropolis, with many residents saying they hadn’t seen the local security outfit in such attires during the day.

Speaking on the development, the spokesperson for the state police command, Grace Iringe-Koko, said the vigilantes were not licensed to carry arms.

Iringe-Koko, a Superintendent of Police, in a short message sent to newsmen, said the CP has given a stern warning to the local security outfits not to carry arms.

According to her, the CP also said vigilantes had no power to arrest people and keep them in detention.

Consequently, she said the CP has directed all Divisional Police Officers to arrest any vigilante seen with arms within their jurisdiction.

“They (vigilantes) are not licensed to bear arms. The CP has directed DPOs to arrest anyone seen with arms within their jurisdiction.

“Also, they do not have powers to detain or keep anyone in custody,” the statement read.

Effiong had in December issued a seven-day window for unauthorised persons, especially cultists, to submit weapons in their possession or risk arrest.