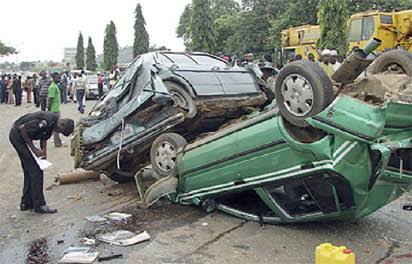 Tragedy struck on Friday when a truck lost control and crushed a pregnant woman and a minor to death along Abeokuta-Ibadan expressway in Ogun State.

The accident which involved a DAF truck with registration number, BDJ 112 XF, was reportedly caused as a result of brake failure, causing it to crash into a building where it killed the two occupants of the house.

Some other occupants of the building and two pedestrians were said to have sustained injuries during the crash. They were said to be receiving treatment at the hospital.

The spokesperson of TRACE said the truck was traveling to Ibadan from Ewekoro when the driver lost control and rammed into the building.

According to Akinbiyi, police officers were deployed to the scene of the incident to prevent youths who were angered by the accident from causing chaos.

“Corpses of the pregnant woman and male minor, have been deposited at Odeda General Hospital morgue while the remaining accident victims rescued to Ajitola Hospital At Kila, for medical treatment.

“This (accident) is a sad and an unfortunate incident coming against the backdrop of reported crashes that have happened back to back for the past three days across the state.

“The dead victims in this unfortunate incidence were occupants of the building, living and domiciled there in,” he added.