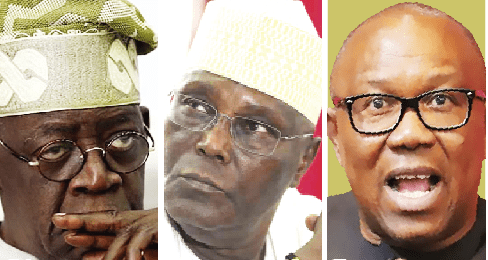 Nigerians voting for a new president next month will have 12 contenders to choose from but the three men seen as the leading candidates have been separately accused of trading in narcotics, money laundering and global tax avoidance.

None of them has ever been indicted, which would rule them out from running for office, but the high-profile allegations have raised questions over their candidacy.

“It is choosing between bad candidates,” said Auwal Rafsanjani, head of the Nigerian branch of anti-corruption watchdog Transparency International, pointing out how widespread corruption has caused devastating levels of underdevelopment and poverty in the oil-rich nation.

The three top contenders are Bola Tinubu from the governing All Progressives Congress, Atiku Abubakar from the main opposition People’s Democratic Party and Peter Obi from the Labour Party.

All three say they made their fortunes legitimately and deny any wrongdoing.

Tinubu, who served two terms as the governor of Lagos State, is probably the most talked-about candidate on the ballot.

There are endless debates about his age, name, health status, work profile and the authenticity of his university certificate, but it is for the source of his incredible wealth that he has faced the most scrutiny.

Many believe that Tinubu, 70, is one of Nigeria’s wealthiest politicians, though there are no official records.

The most visible extent of his wealth is a mansion that sits in a sprawling compound in the Ikoyi area of Lagos – an upmarket part of Nigeria’s commercial hub. It was here on Election Day in 2019 that onlookers witnessed the rare sight of two armoured vehicles, similar to bullion vans used by banks to transport cash, driving through his gates. His aides denied the subsequent accusations that he was involved in vote-buying.

But questions about his wealth have been raised.

In December 2022, he told the BBC that he inherited some real estate which he then invested, but in the past he also said he became an “instant millionaire” while working as an auditor at Deloitte and Touche.

He said he had saved $1.8m (£1.5m) from his wages and other allowances, nearly the same amount found in accounts linked to him in a 1993 dispute with the US authorities.

In documents that are publicly available, the US Department of Justice alleged that from early 1988, accounts opened in the name of Bola Tinubu held the proceeds of sales of white heroin, a banned substance.

Kevin Moss, the special agent that investigated the operation, alleged that Tinubu worked for their prime suspect Adegoboyega Akande.

The agent said that Tinubu initially admitted to him on the phone that he knew Akande, but later recanted and said he had had no financial transactions with him.

While the court confirmed it had cause to believe the money in the bank accounts were the proceeds of drug trafficking, Tinubu and the others denied the allegations, and the court never made a final order about the money’s origins.

Instead, Tinubu, who was not personally charged over the money, reached a compromise settlement with the authorities and forfeited $460,000.

“He was also a major figure in the corruption trial of former US Congressman William Jefferson, who in the Senate reportly described Abubakar as “really corrupt” and said he needed money to bribe him to approve a US company’s business deals in Nigeria”

Tinubu has always denied any links to the drugs trade and his spokesman, Festus Keyamo, said the forfeited funds were part of a civil forfeiture and not a criminal one.

Last year, he also reached an out-of-court settlement with accountant Oladapo Apara, who had fallen out with Tinubu.

Apara was a founder of Alpha Beta Consulting, established when Tinubu was the Governor of Lagos State and given the lucrative contract to track taxes in Lagos State, which it still holds.
The accountant alleged Tinubu had a 70% controlling interest in the company through proxies – and the firm received about a 10% commission on revenues collected, which he estimated to be $3.48bn between 2002 and 2018.

Tinubu, however, denied this, saying he does not receive commissions on taxes received by the Lagos State government.

Apara said he was kicked out of the firm in 2010 after he alleged that some funds had been misappropriated – and began a long legal battle to seek redress.

He argued that he could not be sacked as a founder of the firm and demanded compensation from Tinubu, which resulted in a court case in 2021.

In September 2018, he also tweeted that he had written to Nigeria’s financial-crimes regulator, the Economic and Financial Crimes Commission, accusing Alpha Beta of tax evasion – the actual letter that accompanied the tweet, which detailed the allegations, has since been deleted from his account.

Alpha Beta denied the allegations and said Apara had been sacked for fraud, which he denied.

Tinubu has consistently denied links to the firm, but was a party to an undisclosed settlement between Alpha-Beta and Apara last June, leading to the termination of the parties’ claims against each other.

The BBC had asked Tinubu about the settlement, the US allegations and the questions over his wealth but he did not reply to a request for comment.

ATIKU ABUBAKAR AND THE US SENATE

Atiku Abubakar touts himself as the most experienced candidate on the ballot, having served as vice-president between 1999 and 2007 – and it is this period around which there is some controversy.

His former boss, ex-President Olusegun Obasanjo, had accused him of embezzling $145m from the Petroleum Technology Development Fund in 2003.
Obasanjo, who does not shy away from publicly sharing his opinions about other politicians, dedicated a chapter in his book, My Watch, published in 2014, to the alleged transgressions of his former deputy.

Abubakar denied the accusations, saying $145m was placed in commercial banks to accrue interest so it could be ploughed back into PTDF projects.

The 76-year-old said he first made money from farming and owning houses in his home state of Adamawa. A former customs officer, he said that he recognised early in life that he had “a good nose for money”.

It was in the 1980s that he established an oil-servicing firm that catapulted him into the world of the wealthy.

Opponents have accused him of flouting a law that prohibits civil servants from engaging in private business other than farming.

Abubakar’s spokesperson described his venture as a small business that many public servants engage in, such as using their car as a taxi or setting up a shop in front of their house to support their families.

“He only invested his income to earn interest. He was not doing any other work in the form of private work like you are inferring,” Paul Ibe told the BBC.

In 2010, a US Senate committee report alleged that between 2000 and 2008, Abubakar, through one of his four wives, transferred more than $40m in “suspect funds” into the US from offshore shell companies.

The report claimed that at least $1.7m of this came from bribes paid by German technology company Siemens, which pleaded guilty to bribery charges in 2008 and agreed to pay a $1.6bn fine.

He was also a major figure in the corruption trial of former US Congressman William Jefferson, who in the Senate report described Abubakar as “really corrupt” and said he needed money to bribe him to approve a US company’s business deals in Nigeria.

Jefferson was convicted in 2009 and sentenced to 13 years in prison, which was subsequently reduced.

Abubakar has repeatedly denied any wrongdoing and neither he nor his now-divorced wife face criminal charges in the US.

“Atiku Abubakar is not on trial for corruption or any other misconduct either in Nigeria or any foreign land,” Ibe said.

“He can only be unfit for public office when he is indicted by a court of law. That is not the situation.”

PETER OBI AND THE PANDORA PAPERS

Peter Obi, who has also served two terms as governor – in his case in the eastern Anambra State, does not hide his immense wealth, which he says has been made through banking and importing various goods into Nigeria.

Dubbed “Mr. Clean” by his supporters for being a rare Nigerian politician without accusations of embezzling public funds, it came as a surprise to many when his name came up in 2021 in the Pandora Papers.

This was a leak of almost 12 million documents that revealed the hidden wealth, tax avoidance and, in some cases, allegations of money laundering by some of the world’s rich and powerful.

Nigeria’s Premium Times, one of the newspapers that worked on the Pandora Papers investigation, alleged the documents showed that in 2010, when Obi was Anambra State Governor, he set up a company, named after his daughter, in the British Virgin Islands to help him avoid tax.

Making use of a tax haven is not illegal, though setting up foreign bank accounts when serving as a public officer is not allowed.

The Premium Times said this showed that Obi had failed to declare his assets, and it also alleged that he had failed to resign from the UK-registered company Next International, of which he was director when he became governor – engaging in private business, which is not allowed for public officers.

His resignation was registered 14 months into his term.

The 61-year-old has never been charged over any of the revelations.

Obi told the BBC an impeachment trial had investigated the allegations surrounding his business affairs in 2006 and found he had acted within the law.

He added that he had established a blind trust to oversee his business arrangements, including the family’s offshore holdings.

“A blind trust is allowed within the law,” he said.

Obi has also been accused of a conflict of interest after investing $20m of state funds while being governor in a brewery, in which his family holds shares through Next.

He denied the allegations, saying the investment greatly benefited Anambra State over the years.

There has also been criticism that Anambra State invested in Fidelity Bank, where he was once chairman.

“Anambra State invested in Fidelity Bank, where I have interests, because it is a publicly quoted company,” he told the BBC, dismissing any suggestion that any of the revelations about his finances cast doubt about his fitness for office.

PRESIDENT BUHAR’SLEGACY
Last week, a corruption row has blown up between Abubakar’s and Tinubu’s camps.

Each had accused the other candidate of siphoning public funds through proxy companies known as special purpose vehicles (SPVs) while in office, saying this makes them ineligible to run, with a campaign spokesman from Tinubu’s APC saying he is taking the case to court.

Both deny the allegations, but the issue is now dominating rallies.

The general issue about addressing corruption has not been a major talking point during this electoral campaign.

This is in stark contrast to the frenzied anti-corruption promises that saw President Muhammadu Buhari elected in 2015.

The 80-year-old is stepping down this year, but analysts argue he has done little to tackle the problem while in office.

“Maybe Nigerians are too familiar with corruption and have noticed that nothing fundamental is changing,” said Rafsanjani.

No governor can dictate to voters again, Atiku boasts