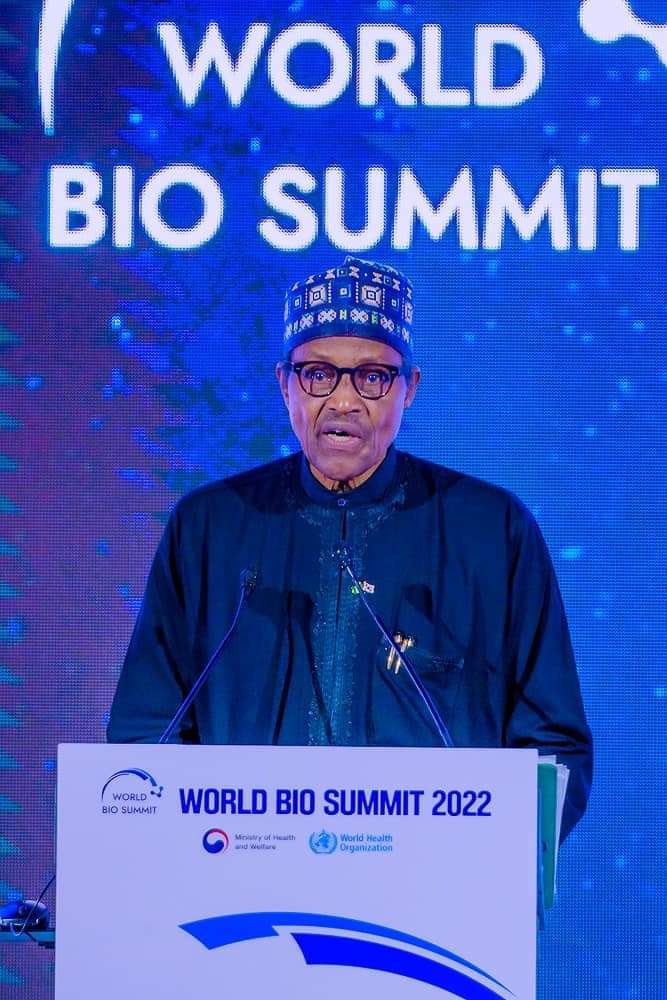 President Muhammadu Buhari has enjoined African Ambassadors to continue to give preference to the protection of the interests of the African continent and her people.

The President made the call on Wednesday in Seoul, during an audience with African Group of Ambassadors accredited to the Republic of Korea, on the sidelines of the First World Bio Summit.

According to the Nigerian leader, “the economic prosperity and development of Africa is the collective responsibility of Africans in leadership positions. I therefore, call upon you as a group and as individuals, to promote the agenda of the Africa Continental Free Trade Area which is aimed at making Africa an attractive common market for the global community.”

Stressing the need to speak with one voice and project the correct African story to the rest of the world, President Buhari told his guests that “it is imperative that as you go about your diplomatic duties, you take into cognisance, the contents of the African Union (AU) Charter and the AU Agenda 2063 as they represent the priority expectations of the African Continent. We need to engage the rest of the world with one voice, based on our narratives that are carefully crafted in the two documents under reference.”

He also called on them to “continue in your individual and group capacities to project African narratives to reflect the correct standing of Africa in the world as you go about your diplomatic responsibilities to your respective countries,” while commending their exemplary activities in their host Asian country.

The Nigerian President further encouraged them to “sustain the already existing friendly relations among the African group and continue to look after one another with the aim of projecting Africa as a single unified continent.”

He also appreciated the Ambassadors for the warm reception accorded him and his delegation on arrival at the Seongnam International Airport, Seoul, on Monday.

Speaking at the event, Geoffrey Onyeama, Nigeria’s Minister of Foreign Affairs, said the reception shows African solidarity, as the African Union captures and institutionalizes the unity of the continent, a position shared by Amb Ali Magashi, Nigeria’s Ambassador to South Korea.

Ambassador Carlos Boungou, Dean of the Diplomatic Corps, thanked President Buhari for his leadership and achievements in Nigeria, Africa, and global affairs.