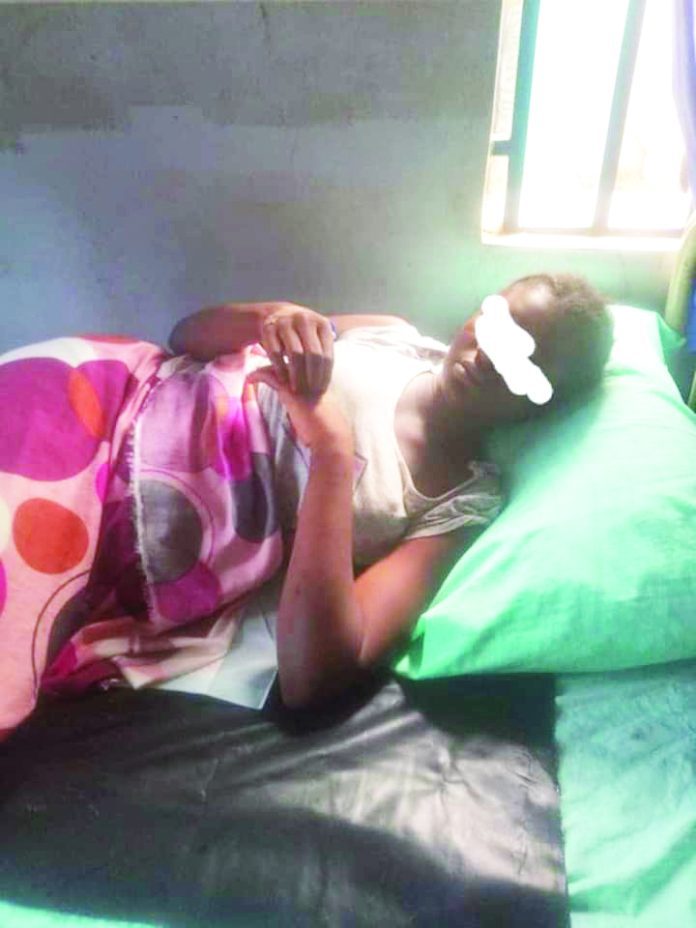 Life has been agonizing and torturous for a 15-year-old girl simply identified as Blessing, after her uncle, a police officer, Inspector Nathaniel Iliya, attached to the Nasarawa State Police Command, raped her serially till he got her pregnant.

It was gathered that Iliya had gone to Jos, Plateau State early last year to ask Blessing’s mother to release the minor to him so as to assist his wife who put to bed.

The police officer was said to have promised Blessing’s mother, a widow who is doing menial jobs to sustain herself in Gada Biyu, Jos that he would cater for the girl’s feeding, clothing and education.

After about a year that Iliya brought the girl under his roof in Lafia, he allegedly started abusing her sexually.

The victim, who has been hospitalised, revealed that her uncle drugged her repeatedly by putting harmful substances in soft drinks to sedate her, after which he would wake up to find out that he had been raped and sexually molested.

According to Blessing who is currently battling for her life after her fetus has been removed as a result of abortion carried out on her by Iliya, the police officer threatened to kill her if she divulged her ordeals to her mother or any other person.

Meanwhile, when a Civil Society Organisation based in Lafia, Citizens Centre for Justice, Leadership and Peace got a report of the incident, it reported the matter to the Nasarawa Police Command and Iliya was arrested.

Addressing The Point correspondent, the Executive Director of the Non-governmental society, Emmanuel Kuza, explained that on July 18, 2022, the case of a pregnant underage girl was reported to the Citizens Centre for Justice, Leadership and Peace by a good Nigerian who chose to be anonymous.

The Executive Director of the Citizens Centre moved to Bukan Sidi, behind the Lafia Township Stadium where he was able to locate the victim and immediately counseled her and she narrated her ordeal.

“The victim, who has been hospitalised, revealed that her uncle drugged her repeatedly by putting harmful substances in soft drinks to sedate her, after which he would wake up to find out that he had been raped and sexually molested”

“Blessing, who is a JSS 3 student of GSS Bukan Sidi, Lafia had opened up to her teachers and fellow students on the story of her pregnancy and the identity of the perpetrator because she is close to them, but none of them knew how to help her.

“According to the victim, her uncle by name Inspector Nathaniel Iliya who hails from Adamawa State went to her mother who is a widow and doing menial jobs to sustain herself in Gada Biyu, Jos, Plateau State and requested that she be released to come and live with him because his wife just put to bed through Caesarean section. On his part, he promised to take care of her feeding, clothing and schooling.

“After just about a year of staying with them, the uncle who is a serving police officer started coming home with half a bottle of soft drinks which he gives to her almost every evening. One of the times he puts a substance in the drink. After she took it, she slept off only to wake up the next morning to pains and the sight of blood in her private part and clothes, a clear sign that she was disvirgined.

“These experiences continued for some time. Later on, Mr. Nathaniel does not bother to drug her again but rapes her when she was conscious. After every experience, he threatens that if she dares leak the information, he will kill her. Before she knew it, pregnancy came on. She became afraid of telling the uncle’s wife but informed the neighbours who were afraid of the uncle because he is a police officer.

“She said that she was taken somewhere and given some drugs to take. As on Wednesday when we met, she was practically smelling. We took her to the police who arrested the uncle, and the wife and the son who all played roles in attempting to terminate the pregnancy.

“She was later taken to the hospital where she underwent a scan and it was confirmed that the six months old fetus was already dead due to the drugs that she was made to take. An immediate evacuation took place. The blood samples of the fetus and that of the uncle were taken for DNA test.

“We are afraid the police may want to help one of their own. We want members of the public to help prevail on the Commissioner of Police Nassarawa State to ensure justice is done in this case.

“After reporting to the police, I also alerted FIDA in Nasarawa State and they showed up and were very helpful as we joined forces to ensure the police do the needful. They particularly shouldered the hospital expenses so far while Blessing is still on admission in Lafia, Nasarawa State.

“We were at the office of the Commissioner of Police on Wednesday by his invitation. He informed us that he is under pressure from some officials of Nasarawa State Government to release the suspect.

“Meanwhile, about N246, 000 has been spent on taking the DNA samples and results are due in two weeks’ time.

“The widow-mother of this girl (Blessing) came to town (Lafia) on Wednesday and almost cried her eyes out. Both her and the mother are depressed by this incident,” he revealed.