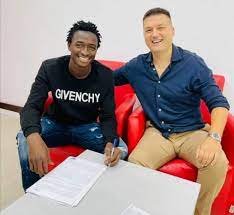 Umar’s move to The Red-Whites was confirmed by Mohammed Lawal, owner and founder of Future of Africa International Football Academy.

Khalifa will be hoping to follow in the footsteps of Sadiq who scored goals aplenty during his time with Red Star’s fierce rivals Partizan Belgrade.

In fifty two appearances for Partizan Belgrade, Sadiq directly participated in an impressive 42 goals, earning himself a move to Almeria who now play in the Spanish top-flight.

The Nigeria national teamer netted the game-winning goal as Almeria defeated Sevilla 2-1 in La Liga at the weekend.