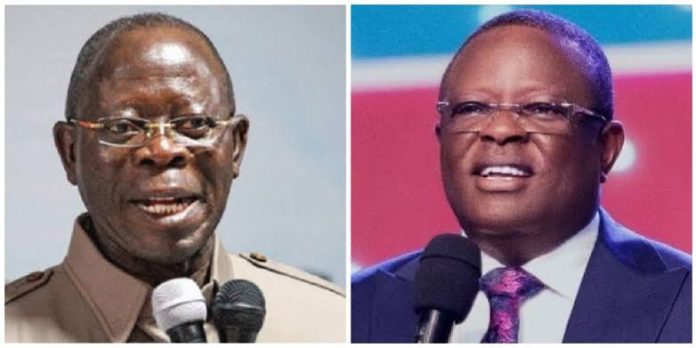 The All Progressives Congress in Rivers State has called for the suspension of the former National Chairman of the APC, Adams Oshiomhole and the Governor of Ebonyi State, Dave Umahi for alleged “anti-party activities”.

The party said both party stalwarts committed the act during the separate invitations of Governor Nyesom Wike to commission some projects in the state where they indicated they won’t campaign for the APC governorship candidate in the state.

On November 16, 2022, Oshiomhole while commissioning the Rumuepirikorm-Ada George Fly-over said ‘‘I have seen the reason why Governor Wike used to win APC in Rivers State. Wike has very strong and energetic youths he is working with, which he used to win my party. Wike will you permit me to go with some of them from Rivers State to Edo State?’’

On November 22, 2022, Governor Umahi while commissioning the Akpabu-Omudioga-Egbeda road was quoted as saying ‘‘Governor Wike you have tried so much, the only day you will see me in Rivers State campaigning is the day we will come here for the Presidential Campaign, apart from that, you will not see me again because all other positions, you will win.’’

In a protest letter dated November 23 2022, and addressed to the National Chairman of the APC, Adamu Abdullahi, the Rivers State chairman of the APC, Emeka Beke said the party has become a laughing stock in the state following the activities of those he described as disgruntled party leaders whom anti-party activities run in their veins.

The APC state chairman said it was disheartening that any time these leaders of the party visit the state, they openly make “scandalous remarks”, thereby demoralizing the spirited and concerted effort of APC members in Rivers State, all in an attempt to please Governor Wike.

In the letter, Beke called for sanctions against the two party leaders saying members of the party in Rivers State are no longer happy with the said anti-party activities.

The letter reads in parts; “With respect to the complaints stated above, we demand as follows;

1. An unreserved public apology from H.E Adams Oshiomhole and H.E Dave Umahi on a live television programme within seven days.

“3. A directive attached with a sanction, that henceforth, anybody coming to Rivers State on the invitation of Governor Wike should stop talking trash and campaigning against candidates of APC in Rivers State.

“Conclusively Sir, we wish to let you know, that if this matter is not properly handled and our positions above granted and implemented, we will resort to taking our destinies by our hands. Remember, we are not restricted from visiting Edo and Ebonyi States to reply H.E Adams Oshiomole and H.E Dave Umahi while also romancing with the opposition.”