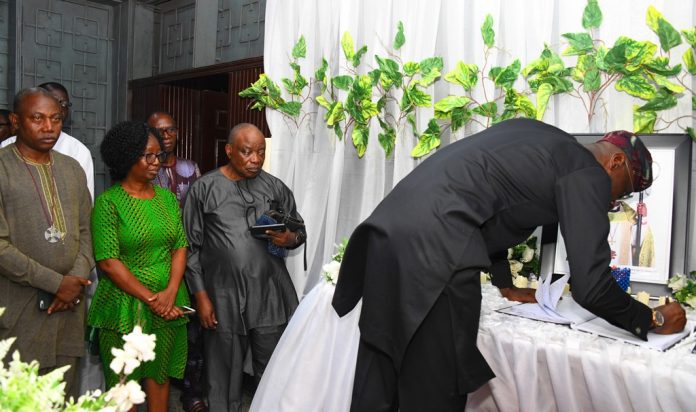 Lagos State Governor, Babajide Sanwo-Olu, on Thursday evening paid a condolence visit to the family of the former Archbishop of the Ecclesiastical Province of Lagos, Church of Nigeria (Anglican Communion), Most. Rev. (Dr.) Humphrey Bamisebi Olumakaiye at the Diocese of Lagos Bishop’s Court, Marina.

Governor Sanwo-Olu and his team, which included the Commissioner for Home Affairs, Anofi Elegushi and some Lagos State Government top officials, were received by the widow of the deceased, Motunrayo Olumakaiye, including family members, Bishop of the Diocese of Ilesa, The Rt. Revd (Prof.) Dapo Asaju and priests.

While consoling the widow, the deceased family and the church, Governor Sanwo-Olu said he was saddened to hear the news of Archbishop Olumakaiye’s passing at the age of 53.

“Rest in peace my brother, my adviser, my Bishop, my Diocesan. You were a great man of God. We will miss you greatly,” Governor Sanwo-Olu wrote in the condolences register.

Governor Sanwo-Olu, in an earlier condolence message issued by his Chief Press Secretary, Gboyega Akosile, described the death of Archbishop Olumakaiye as a personal loss and great loss not only to the Anglican Communion but the Diocese of Lagos and the entire Lagos State.

The Governor also commiserated with the Primate of the Church of Nigeria (Anglican Communion), The Most. Revd Henry Ndukuba, bishops, clerics and the laity over the demise of the Bishop of Diocese of Lagos.

He urged the deceased family, especially the widow, Motunrayo Olumakaiye, friends, clergymen and entire members of the Diocese of Lagos and Ecclesiastes Province of Lagos to take the death of Archbishop Olumakaiye in good faith.

Governor Sanwo-Olu said the pastoral and wise counsel of Archbishop Olumakaiye will be sorely missed by his family, the House of Bishops and the entire clerics and members of the Anglican Communion.