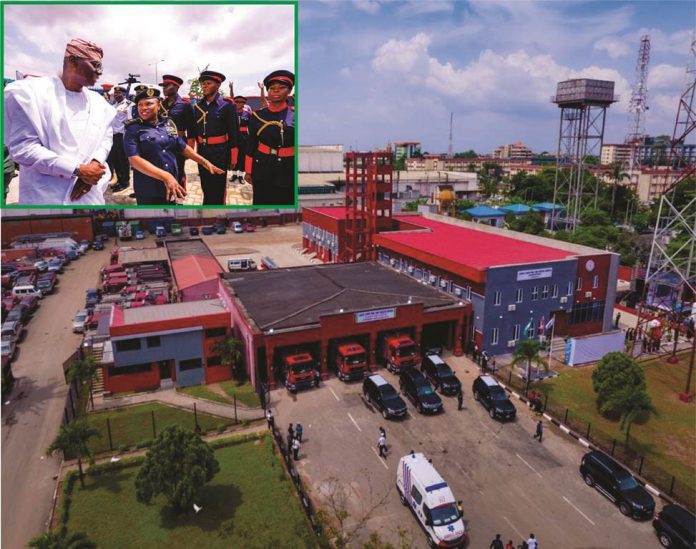 Lagos State Government has recorded a major asset expansion in its emergency response services, with the inauguration of three newly built fire stations in the State.

Governor Babajide Sanwo-Olu, on Wednesday, physically commissioned the new fire station in Ebute Elefun, while he virtually unveiled the other two fire stations built in Oniru and Ajegunle.

The projects were initiated to enhance the response time to disasters associated with fire and to bolster the capability of the State’s emergency management system.

The Governor, on the same day, commissioned the upgraded Fire Department headquarters in Alausa.

With the three additional assets, Lagos now has 21 fully equipped fire stations across the State.

The facility expansion programme was part of the recommendations that followed the 2020 comprehensive assessment carried out by the Lagos State Government in the emergency response department aimed at enhancing performance.

Sanwo-Olu said one of the challenges identified was the inadequate fire stations to efficiently manage fire outbreaks at a scale that would allow quicker response time and speed.

His administration’s response to the identified gaps in emergency services, the Governor said, was proactive and strategic for the development of a practical road map to address limitations and reposition the emergency agencies for optimum performance.

He said: “Today’s handing over of three newly constructed fire stations at Ebute Elefun, Oniru, Ajegunle and the newly upgraded Fire Service Headquarters in Alausa to the Lagos State Fire and Rescue Service Agency is the fulfillment of our administration’s commitment to the protection of lives and property of our citizens.

“We believe response time to fire disasters is critical as it can make a lot of difference between life and death. The earlier the fire is attacked, the lesser the damage it will have on people and property. To enable fire responders to reduce the distance and overcome other unplanned encumbrances on the way to fire scenes, the idea of having at least one fire station in each of the 20 Local Government Areas of the State was conceived.

“Lagos requires protection through deliberate disaster mitigation and emergency management strategies that are realistic and comprehensive. We are convinced that the construction of new fire stations will allow quicker response to the scene of emergencies within their specific area of coverage, as we believe the proximity of fire stations to incident locations is crucial to rescue and safety operations. With the new facilities, firemen will get to the theatre of operations at record time.”

Sanwo-Olu said the new stations were part of the State’s investments in the safety and well-being of residents and businesses. The assets, he said, would help limit the discomfort suffered by residents and considerably reduce losses associated with fire outbreaks.

Before the end of the second quarter of next year, the Governor said his administration would add another three fire stations in Ijede, Kosofe and Ijegun.

He said the upgrade and rehabilitation of existing fire stations had been done to further consolidate the position of the Lagos Fire and Rescue Service Agency as a leading fire fighting outfit in the country.

Sanwo-Olu enjoined residents living around the new fire stations to take ownership of the assets and protect the facilities from vandalism.

“Our efforts have enthroned an operational environment that provides the necessary ambiance, comfort and support that will ensure optimal performance of our firemen. These interventions will further consolidate the position of the Lagos State Fire and Rescue Service Agency as a leading fire fighting outfit in Nigeria,” the Governor said.

Special Adviser to the Governor on Special Duties and Inter-Governmental Relations, Mobolaji Ogunlende, said the facility expansion was part of the plans to strengthen security in Lagos.

He said the new stations were designed to have their dedicated sources of power and water supply, with modern facilities for the convenience of firefighters deployed to man the stations.

“With these investments the Sanwo-Olu administration has made in this sector, I am confident that Lagosians would have a new experience in fire and rescue operations,” Ogunlende said.

Director of Lagos State Fire and Rescue Service, Mrs. Margaret Adeseye, said the new assets would raise the capacity of the agency in emergency operations, adding that Ebute Elefun station would serve more than 20,000 population on Lagos Island dotted by high-rise buildings.

General Manager of Lagos State Infrastructure Asset Management Agency, Nike Adekanbi, described the newly upgraded Fire Department headquarters in Alausa as “an edifice built to last”, noting that the building expanded to strengthen the administrative capacity of the agency.

She said the Sanwo-Olu administration revamped 14 fire stations, creating over 600 jobs in the process.

The new administrative building of the Lagos Fire Service now has 60 offices, with an expanded appliance bay, landscaping, perimeter fence and developed road network which was constructed by the Lagos State Public Works.