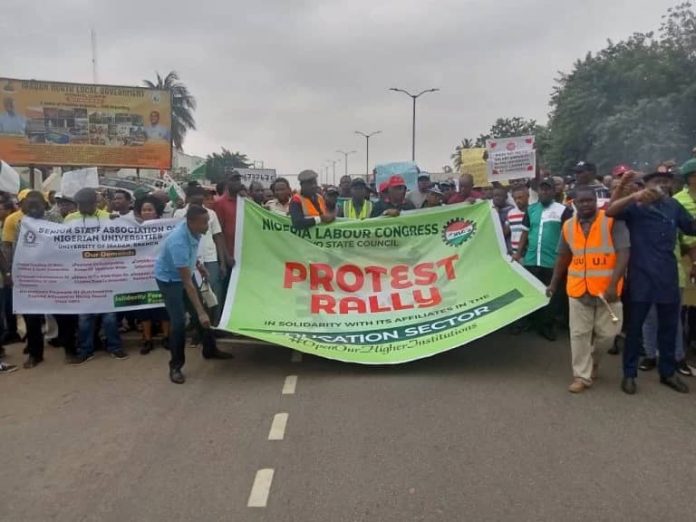 Security operatives have surrounded the Lagos State Government Secretariat ahead of today’s planned protest by the Nigerian Labour Congress.

The protesters are on their way to the secretariat to deliver a protest letter to Governor Babajide Sanwo-Olu.

The security officials said they are on ground to monitor the protest.

Although the protest currently going on nationwide is in solidarity with the strike action of the Academic Staff Union of Universities, however, the protesters are also using the opportunity to beam more light on other issues affecting the nation.

The protesters carried placards with several inscriptions such as ‘Stop importation of petrol, refine the refineries’, ‘Nigeria at 60 years of independence, more hunger in the land, among others.

Another placard read, “Reduce the cost of governance now, save the masses from poverty and hunger.”

Also, various labour unions in Oyo State, on Tuesday, joined their counterparts across the country to embark on protest.

Some of the unions and associations that have been seen included members of Academic Staff Union of Universities, Trade Union Congress, National Union of Local Government Employees and the Nigeria Union of Journalists.