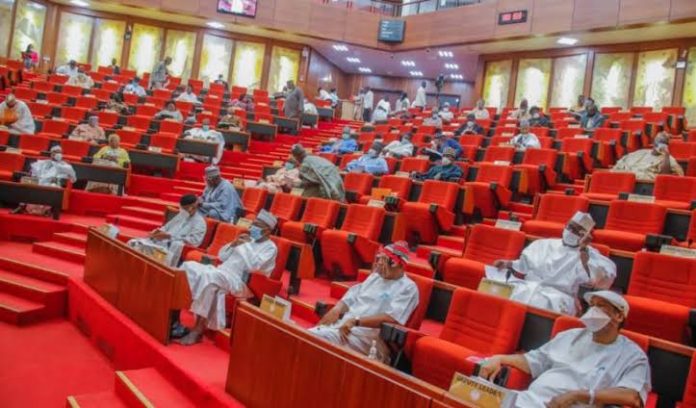 The Senate on Tuesday stepped down a bill which sought to include rotation of power among the geo-political zones in the Constitution of the Federal Republic of Nigeria.

The bill’s movement was cut short at the second reading.

The decision to step it down followed critical comments against it by fellow senators, especially the manner of its presentation.

Before the bill was withdrawn, Moro drew the attention of the Red Chamber to the principle of federal character in the Constitution which requires fair and equitable representation of different ethnic and regional groups.

He argued that Nigeria as a nation of diverse ethnicities, power rotation would be a veritable tool for national integration, peace and stability.

Moro acknowledged that the bill was not for the coming 2023 general elections “because by the time it runs its full cycle, the elections would have been concluded and for democracy to thrive, it must be adapted to the political realism of its environment.”

In his contribution, Plateau State senator, Istifanus Gyang, who was the only lawmaker who spoke in favour of the bill, said the bill would go a long way in helping the country to manage its diversity.

Feelings and sentiments, he added, can be addressed with the existence of such legislation.

“Parties adopt principles of rotation but bringing a statute to formalise it is better,” he said.

He added that “Ethnic minorities suffering as a result of marginalisation, would be grateful to the ninth assembly.”

However, for Bala Na’Allah, (APC, Kebbi), the danger of rotation will do great violence to the desire to live as a united country.

In his intervention, the Deputy Senate President, Ovie Omo-Agege, observed that the bill was not a constitutional amendment bill and therefore must be represented as such.

“To deprive somebody of the right to run for office through a piece of legislation, contrary to the Constitution, will render that Act, null and void,” he added.

Omo-Agege tongue lashed senators of the leading opposition party, the Peoples Democratic Party, whom he said were speaking based on sentiments.

Omo-Agege jokingly challenged the PDP senators to “plead with their presidential candidate to step down so that power can come to the South. Why wait to codify this into law?” he queried.

It was when Adamu Bulkachuwa (APC, Bauchi North) was arguing against the bill that Moro raised a Point of Order – 42 and announced his decision to withdraw the bill.

He said after listening to the debate from colleagues, he would step down the legislation, make further amendments and represent it in a proper manner on another legislative day.

The proposed legislation comes amid crisis in different political parties arising from disagreement over power rotation.

The gale of defection that hit major political parties like the APC and the PDP, especially at the state and National Assemblies, was essentially because lawmakers disagreed with their state governors who had other candidates to impose or insisted that a candidate from another district be given tickets.

The current crisis in the PDP is essentially the off-shoot of the failure of the party to adhere to its rotational policy.

To ensure a semblance of inclusiveness, Rivers State Governor, Nyesom Wike, and some southern leaders have been agitating for the resignation of the party’s national chairman, Iyorchia Ayu, so as to balance the lopsidedness in the leadership structure of the party.