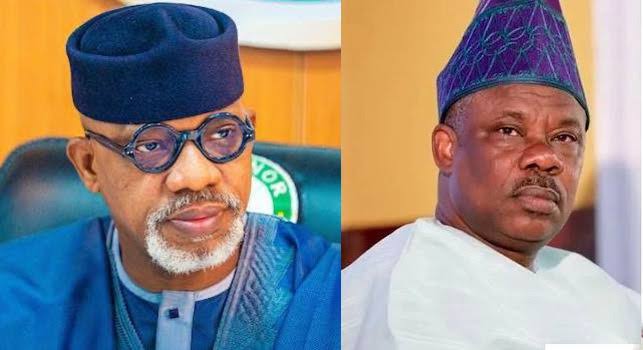 The national leadership of the All Progressives Congress is worried by the face-off between the former governor of Ogun State, Ibikunle Amosun and his successor, Dapo Abiodun.

Consequently, the party has waded into the war of words between the two former friends and called for a halt of hostilities.

The National Vice Chairman, South West of the APC, Isaac Kekemeke, said the party had observed the brewing misunderstanding between the respected leaders/elders of the party in Ogun State.

In a statement issued on Monday, Kekemeke said although misunderstandings and quarrels were an essentially inevitable part of life and human organisations, the party, especially in the South West, could not afford any form of dispute at this time.

He said the contention was coming at a time when all hands must be on deck to secure a resounding electoral victory for the party’s presidential candidate, Bola Tinubu.

“The party in the zone has already initiated actions to ensure that this family misunderstanding and others elsewhere in the South West are amicably resolved,” Kekemeke said.

Kekemeke, who also doubles as the chairman of the South West Executive Committee of the party, appealed to the former governor and his successor to “sheath their swords and direct their supporters to cease henceforth from making public statements that will further divide the party in Ogun State and the zone.”

“I urge all party faithful in the state to remain steadfast, rest assured that our party will emerge stronger and better,” he added.

Amosun had fired the first salvo on Saturday when he called for the removal of the governor in 2023 and alleged that the governor was rigged into office in 2019.

He also claimed that Abiodun had also apologised to him for the stolen mandate, but that would not change his mind about working against his reelection.

Amosun had backed Adekunle Akinlade who contested on the platform of the Allied Peoples Movement against Abiodun who was the candidate of the APC.

Abiodun defeated Amosun’s preferred candidate with a margin of 19,517 votes.

While the governor emerged winner of the polls with 241,670 votes, Akinlade had 222,153 votes to trail behind in second place.

Amosun, however, went ahead to win his election to represent Ogun Central in the Senate.

The governor had replied to his predecessor, saying he would not be distracted by any person who has a problem with “self-delusion.”

“Ogun State is not anybody’s father’s inheritance,” he had retorted, adding that he would rather focus on his mandate and not join issues with anyone who wants to play god.

The governor also called on the people of the state to ignore his predecessor.