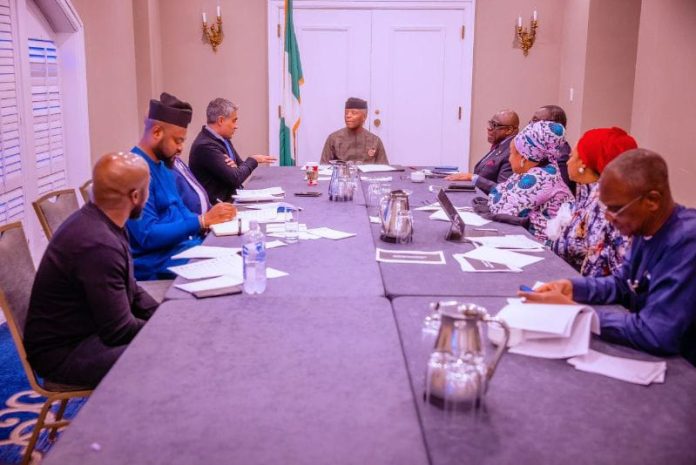 By deepening educational cooperation and facilitating collaboration in critical areas such as entrepreneurship, innovation and technology, more opportunities are created to find solutions to the social issues and challenges in the world.

Vice President Yemi Osinbajo stated this on Tuesday during a meeting with senior administration officials and researchers at Carleton University, Ottawa on day two of his working visit to Canada.

He also met some Canadian based business and technology related interests on Tuesday before joining the movie screening of “Two Weeks in Lagos,” a Nollywood movie produced by Nigerian-Canadians.

Speaking at the notable university, Osinbajo observed that, despite several societal challenges, “one of the things that we have seen is that our major social issues can be resolved by people who are thinking about it and have opportunities to reason it out, especially those who can stand aside and look in from the outside and think about it.”

The Vice President stated that the collaboration between Carleton University and universities in Nigeria was one of such ways of providing solutions to some of these social challenges.

Continuing, he stated that, “the idea of an actual involvement with the University system in Nigeria, such as the University of Lagos and University of Nigeria, Nsukka, as well as secondary schools like the Atlantic Hall, and others, are important because they provide an opportunity for sustainable long-running relationships.”

In his view, the Vice President believed that “the collaboration is one that can yield the sorts of incredible benefits that we hope we can get.

“We are also talking about the education of children; we have a major challenge with out-of-school children. We now have a radio school programme, an initiative of an NGO (reaching 55,000 children). Many of these children listen to radio in some parts of the country where radio is the major means of communication.

“We could do much more, in deepening that, using technology, and looking at scaling them up. The challenges and the issues we have to confront are huge, so solutions will need to be on that scale too.”

On arrival, the Vice President was received by the President of Carleton University, Benoit-Antoine Bacon, who “welcomes the opportunity to deepen our partnership with the beautiful country of Nigeria.”

Afterwards, Osinbajo paid a visit to the Innovation Hub at the University, where the Acting Director at the Hub, John Nelson, stated that the university has a large number of Nigerian students studying there, adding that they will be excited at any opportunity for partnership that will further encourage students to study and bring change.

Similarly, in another meeting at the University, there was a presentation using a 3-D Hologram machine showing how teachers can promote online learning for students at different locations simultaneously.

The Vice President was accompanied by the Nigeria High Commissioner to Canada, Ambassador Adeyinka Asekun; and other members of his delegation.

He then attended the movie screening of “Two Weeks in Lagos,” in the evening in Ottawa. The film is produced by Kathryn Fasegha, a Nigerian-Canadian actor, producer and director.

The audience at the movie event included Canadian government officials; the diplomatic corps in Canada; business interests, other Canadians and Nigerian-Canadians.

It would be recalled that on day one of his visit to the North American country, the Vice President had on Monday met with the Canadian Deputy Prime Minister, Chrystia Freeland; top parliamentarians and members of the Canadian government, where deepening bilateral relations between both countries, as well as continuing dialogue on global energy transition issues and climate change, among others, were discussed.

The Vice President also had an interactive session with some leaders of Nigerian groups across different provinces in Canada, where he commended the hard work and honesty of majority of Nigerians in the Diaspora.

Today, Wednesday, the Vice President will be delivering a public lecture on Climate Justice at the Queen’s University in Kingston, Canada.