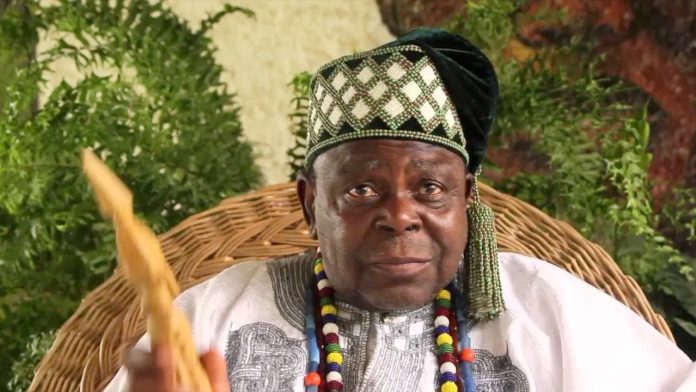 A prominent Ifa diviner, Ifayemi Elebuibon, has explained that ghosts co-exist with humans in the society, especially in big cities such as Lagos, Ibadan, Abeokuta, Osogbo stating that those who died before their ordained time usually return to the earth to complete their time.

According to Elebuibon, the existence of ghosts is enshrined in the Yoruba belief about reincarnation, known in local parlance as ‘Akudaya’.

Explaining the concept of reincarnation in Yoruba cosmology during an interview, the renowned cultural icon said that ghosts are real and that they are the reincarnated version of those who died before their God’s destined time.

Such categories of people, he said, are not allowed entry into heaven.

However, Elebuibon stated that ghosts don’t return to their initial stations when they reincarnate. Those who lived and died in Lagos, Ibadan, Abeokuta, Osogbo would, for instance, move to other communities. He said that usually, those who died in cities often reincarnate in smaller towns and villages while those who lived and died in villages move to cities to avoid meeting with family members.

Once they do, they would varnish into another world, Yoruba people believe.

The Ifa priest said that whereas many people are oftentimes unaware of the presence of ghosts in their midst, those who are deeply spiritual can see and relate with them. He added that sometimes, ghosts reveal themselves to whomever they please.

According to him, those who were killed by their haters, criminal elements and evil doers; those who died through road accidents; and those who passed away through sicknesses and diseases; departed the world untimely.

Their spirits, he said, could not yet be accommodated in heaven, hence, they would return to the earth to live in another clime.

Attributing the geometrical rise in population in Nigeria to increasing presence of ghosts, Elebuibon said that a percentage of inhabitants of major cities, especially in the South-West, are ghosts who coexist with the living.

Responding to questions on facts about Akudaya, he said, “It is true that there is reincarnation. Everyone who had died without attaining the ordained would return to the earth and start to live in another land different from his or her former station.

“For instance, if you kill a bush rat at a spot in the bush, return to that place another time, you will see that same rat. It is the same for human beings. If a human being dies and it is not the ripe time for him or her, he or she would reincarnate to live in another place.

“I remember when the Ile-Ife and Modakeke people were at war, hundreds were killed and at that time, you would discover that the population in Osogbo and its environs were increasing tremendously.

“Just look at Lagos, Ibadan, some of the people you see going about in large numbers are ghosts. It is those whom they want to see that would see them.”

On the belief about reincarnation in Yoruba land, the Ifa priest said, “There are divergent history versions that back this up. In the olden days, the dead were not buried in the ground.

The corpses would be dumped in the forest but when cases of Akudaya became rife, people started to dig the ground to bury the dead.

“But, it doesn’t stop the dead from reincarnating. There is strong evidence to prove this. We had cases of people who died but it was discovered that they were met living in other communities. We call them wraiths. It is not a lie. Yoruba belief and cosmology support this.

“Reincarnation is real and that’s why we beg God to prolong our lives so that we can die at old age before we join our ancestors. If anyone dies untimely, such a person would return to the earth to live in another place. Evil people, sickness and road accidents do cut short people’s lives. Check the rate at which people die in road accidents these days.

“I went to Abeokuta one day and I was sitting beside an old woman, and she told me that people were not as many as we have it now when she was younger adding that many people who died of road accidents in Lagos returned to Abeokuta, Lafenwa and other communities to live. She said that most people are ghosts. I also thought about what the old woman told me and I discovered that it is true. There are so many on the planet earth.”

Elebuibon’s argument was corroborated in a piece by a Senior Consultant Trauma Surgeon and Coordinator at the National Trauma Centre, National Hospital, Abuja, Dr. Usman Gwaram, who explained that ghosts are real.

“A ghost is the soul or spirit of a dead person that can appear to the living. These spirits make deliberate attempts to influence, most often harmfully, the living. They are believed to hunt particular locations, objects or people they were associated with in life often for vengeance from a grievous wrong.

“The fair ghosts attack the perpetrators and accomplices to their wrongs while the real dreadful ones flurry on a rampage attacking both the guilty and the innocent in the community.

“Certain religious practices like funeral rites, exorcisms, and some practices of spiritualism are specifically designed to rest the spirits of the dead, especially those that died from unnatural causes or that suffer violent deaths. These practices are targeted at appeasing the restless spirit through offerings, provision of justice and contrition by the entire community.

“The overwhelming consensus of science is that ghosts do not exist, but their existence is impossible to falsify,” the trauma surgeon said.

But, a Christian cleric, Olusegun Solomon, differed from the claims by Elebuibon and Gwaram, saying that there was nothing like reincarnation.

Solomon warned the people not to believe the claim that those who die untimely would return to the earth to continue living.

Making reference to the Holy Bible, he said that “It is appointed unto man once to die, after this is judgement.

“We know that there are people who converse with ghosts but the word of God makes us understand that it has been appointed unto a man to die once. And if we are talking about reincarnation, it means that one is going to die twice. No! Man shall die once and after this, judgement. The plan of God is that we have come to the earth and after leaving the earth, we are returning to God.

“That someone dies and he or she is being found in places such as Lagos, Kaduna or Ibadan, is an ancient belief, but the gospel established it to us in Hebrew 9 verse 27 that after death is judgement.

“Christianity does not approve or support reincarnation. Once you die, you are going to face judgement, so don’t think that you will go to another place to enjoy life. There is nothing like that.”