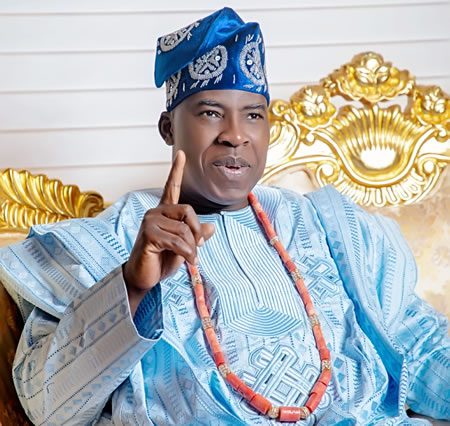 Osun State chapter of the People’s Democratic Party has warned former governorship aspirant of the party, Dotun Babayemi, to stop further legal action against the emergence of Ademola Adeleke as the party candidate if truly he is a genuine member of the party.

The party said there was an apparent attempt by the aspirant to become a tool of the All Progressives Congress to truncate the overwhelming victory of PDP at the just concluded governorship poll, declaring that “such treachery is an exercise in futility.”

In a statement issued on Sunday by the Caretaker Chairman of the party, Akindele Adekunle, the party described as worrisome Babayemi’s refusal to listen to calls by elders of his group who urged him to discontinue legal challenge on Osun PDP primary, reminding him that he is increasingly emerging as an instrument of a defeated governor who is struggling to come to term with his crushing defeat at the poll.

The party noted that the last ruling of the Court of Appeal which struck out Babayemi’s case, should put paid to further litigation on the primary, warning that any decision to pursue the issue further will smack of open anti-party activity and a direct disrespect for the people of Osun State who voted massively for Adeleke.

“A very dangerous and self-destructive dimension is the emerging alleged collaboration between Babayemi and the APC to continue the primary case. Such an evil alliance will end in further legal defeat as the aspirant has no strong legal basis for his litigations.

“From the beginning of the litigation to date, it was obvious the aspirant was only holding unto straws as the primary that produced Senator Adeleke fulfilled all extant regulations and legal requirements in line with the electoral act among others.

“The party not only duly authorized the primary, the right delegates participated at the right venue with right statutory supervision while a valid court order equally mandated the holding and organisation of the governorship primary.

“We are therefore constrained to call on Babayemi to toe the path of honour and embrace the overwhelming choice of Osun people. Any hope of stealing people’s mandate for Senator Ademola Adeleke through the backdoor is a venture doomed from conception. Enough is enough,” Adekunle said.

But in a quick response, Babayemi said his decision to approach the Supreme Court over the litigation against the emergence of Adeleke as the candidate of the party was not to truncate the victory of the party at the recently concluded governorship election in the state but to ensure it translates to good governance.

Babayemi’s campaign organization in a statement issued on Sunday, insisted that Babayemi was out for justice with a view to claiming his mandate.

The organization noted that having explored all internal mechanisms of the party to no avail, the option left as spelt by the party’s constitution was to seek justice through the judiciary.

“Our symbol, Omooba Dotun Babayemi, is not seeking to truncate PDP’s victory but he’s out for justice, seeking to claim his mandate at the law court. Is such a lawful trajectory out of place? For all those who are now crying wolf, what genuine efforts did they make to ensure the PDP is not exposed to litigation?

“Why would Akindele and those in his mould choose to approbate and reprobate at the same time. Just recently, the Dr. Adekunle Akindele-led Caretaker Committee was removed by the National Working Committee (NWC) of our great party, PDP, but went to the law court to stop the party from replacing them with a more non-factional Caretaker Committee for Osun State PDP. This Committee headed by Akindele is the one serving as a tool now being used to subvert the legitimate wheels of justice.

“Subtle blackmail by the party’s Caretaker Committee Chairman that Babayemi had become a tool of the All Progressives Congress (APC) won’t deter him from pursuing a legitimate cause.

“All concessions made by the Babayemi’s group to achieve the desired peace before the governorship election were rebuffed by the Ademola Adeleke group.”