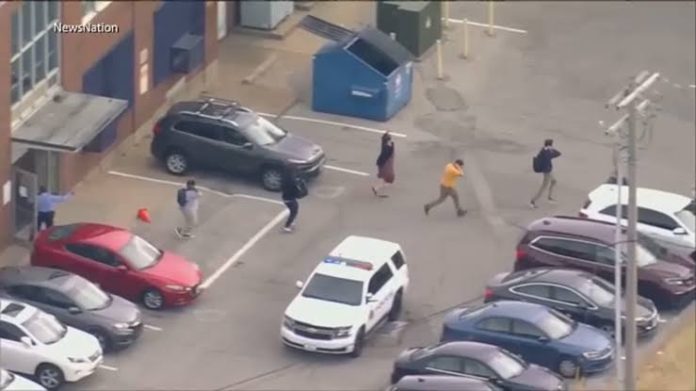 AT least three people, including the suspect, have died and seven others are injured after a shooting at a high school in St Louis, Missouri.

The doors of the school building were locked and it was not immediately clear how the suspect entered.

The suspect, identified by police as a 19-year-old former student, exchanged gunfire with police and later succumbed to his injuries.

His motive for the attack at the school of about 400 students is unclear.

A teenage girl was pronounced dead inside the school, while one woman died in hospital, police told local media.

The seven injured – three girls and four boys – all had non-life-threatening injuries, according to local media.

Students were running out of the school when officers arrived and said the attacker had a “long gun”, according to the city’s police commissioner Michael Sack.

He said seven security workers on site had acted quickly to notify other staff and contact police.

The gunman was found to be carrying hundreds of bullets that were sorted into nearly a dozen high-capacity magazines, Mr Sack later said, adding: “This could have been much worse.”

“This is a heart-breaking day for all of us,” he added. FBI agents are helping the investigation.

One student told the KMOV local news station the attacker had walked up to a friend and asked her: “You ready to die?”

Raven Terry said: “We just ran real, real fast… and we were just crying, all shaken up about it.”

Taniya Gholston, 16, told the St Louis Post-Dispatch newspaper that the gunman had entered her classroom and tried to shoot her.

“I was trying to run and I couldn’t run,” she said. “Me and him made eye contact but I made it out because his gun got jammed.”

She said she overheard the attacker saying: “I’m tired of this damn school.”

Police said the gunman graduated last year from the school and had no history of criminal behaviour.

One of the victims was identified by family as health teacher Jean Kuczka.

Kuczka, 61, had taught at the school since 2008, according to an online biography, and was a grandmother of seven.

“My mom loved kids,” her daughter Abigail Kuczka told the Post-Dispatch, adding that she had died protecting her students.

Those injured are said to be suffering from gunshot wounds, shrapnel injuries and cardiac arrest.

“Our children shouldn’t have to experience this,” St Louis Mayor Tishaura Jones said at a news conference after the shooting.

“They shouldn’t have to go through active shooter drills in case something happens. And unfortunately, that happened today.”

Data from the Education Week outlet show there have been at least 35 school shootings, in which at least one person was killed or injured, so far this year.

Earlier on Monday, a teenager in Michigan pleaded guilty to 24 charges, including terrorism and first-degree murder, after a rampage at his high school last November.