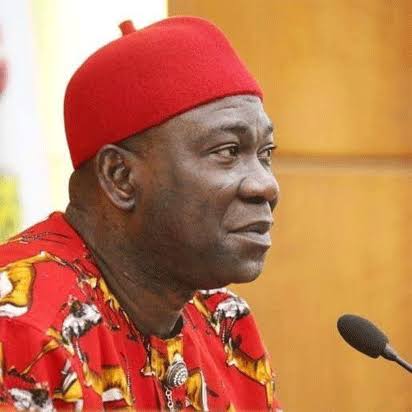 Among Ndigbo, we say, “Onwu gbuo okorobia, ewere asiri jee akwa ya”. When sudden death befalls an able-bodied, young man, many fallacious stories are told at his funeral. Indeed many tales have been told since the unfortunate fate that befell former Deputy President of the Senate, Senator Ike Ekweremadu, and his family in London.

Only a few days ago, one Houston-based critic vomited a whole lot about Ekweremadu with triumphal gusto and air of finality. Among others, he wrote: “I had always told the senator in his face and written extensively on how he used his time in the Senate to collude with contractors to loot the funds budgeted for several public projects in Igbo land. These, of course, include Enugu/Onitsha, Enugu/Port-Harcourt, and Oji-River/Awgu roads, which have continued to claim many innocent lives. A simple scan of the internet on my name alongside Ekweremadu will show more, including a library, water, and road projects that were looted in my hometown of Ugbo, Enugu State.”

He also added: “One of the perceived prophesies is that I never ceased to tutor the senator on the genius of the adage: ‘A tree does not make a forest.’… Senator Ike Ekweremadu made sure that none of his political associates from his area could rise or shine.”

The irony of it all is that this man’s community, Ugbo, in Awgu LGA, is one of the greatest beneficiaries of Ekweremadu’s sojourn in the Senate, be it in terms of infrastructural projects or human capital development, regular employments, and political empowerment. Beside the asphalt road network across the length and breadth of the hilly community, the water projects, electricity etc., which Ekweremadu attracted to Ugbo, the slanderer’s kinsman and political scion of Ekweremadu, Hon. Toby Okechukwu, rose from being Ekweremadu’s Special Adviser to becoming a three-term Member of the House of Representatives and incumbent Deputy Minority Leader of the House of Representatives.

This has had a multiplier effect in development projects, employments, etc. in Ugbo in particular, and Enugu West, Enugu State and the South East in general. Ekweremadu also facilitated the appointment of the critic’s elder brother, Dr. Alex Ogbonnia, into federal boards and subsequently as Special Adviser to Deputy President of the Senate.

Instructively, although this senseless falsehood that funds voted for the reconstruction of South East roads were diverted by Ekweremadu into buying properties formed the core of the mischievous petition to the Economic and Financial Crimes Commission (EFCC) in 2016 (in a bid to exploit the adverse relationship between the executive and legislature following Ekweremadu’s emergence as presiding officer from opposition and Dr. Bukola Saraki’s emergence without the blessings of the “powers that be”, EFCC has not told anyone that it traced such funds to Ekweremadu after six years of investigating him. The asset forfeiture lawsuit is based on EFCC’s claim that Ekweremadu’s properties are above his “legitimate income” as a former Local Government Council Chairman, Chief of Staff at Enugu Government House, Secretary to Enugu State Government, five-term Senator, three-term Deputy President of the Senate, former Deputy Speaker and Speaker of ECOWAS Parliament as well as a legal practitioner.

Absurd and meretricious as this sounds, I will not go into it since it is subjudice. However, it is suffices to observe that right-thinking Nigerians have continued to flay this strange arrangement where a Nigerian public officer is being called to prove from his overseas detention his innocence over his alleged assets contrary to the well-held dictum and practice that he who alleges, proves. This judicial ambush, which the said writer has condemned, tells an entire story of itself.

It is reminiscent of the July 24, 2018 siege when the EFCC led hosts of security agencies to storm Ekweremadu’s official residence at 4am like the home of Osama Bin Laden without any previous invitation. At the same, battalions of security agents already laid siege to Dr. Saraki’s residence, all in a failed attempt to hold them hostage and facilitate their illegal impeachment.

Elementary knowledge of government tells us that the legislature makes laws, including the Appropriation Acts, while the executive implements them. As it were, Ekweremadu has never been a governor, minister, and director-general of any federal or state government agency. He has not been in a position to administer public funds, except as a local government council chairman between 1997 and 1998 when he was voted the best council chairman at the time.

A striking irony in the whole fallacy of Ekweremadu’s culpability for the state of South East roads is that Chief Olusegun Obasanjo could not reconstruct the Lagos-Ibadan road in the eight years that he was President. The same goes for Abeokuta road.

I travelled by road from Port Harcourt to Yenogoa in November 2020. Obviously, Goodluck Jonathan could not fix the single most important road in the Niger Delta, the East-West road, for the little over five years he was president. I equally travelled from Yenegoa to Otuoke during that trip. It was not paved with gold. In July 2021, Niger Delta youths barricaded the East-West to protest the state of that road.

Just like the Enugu-Onitsha road, travelling on Abuja-Minna Road or Bida-Minna Road is never a pleasant experience. In 2019 and again in 2020, the people of Niger State staged protests, blocking Abuja-Minna road for hours to register their displeasure. In September 2021, truck drivers barricaded the Bida-Mokwa-Kwara road in protest. Malam Abdullahi Mohammed, a tanker driver, lamented to the News Agency of Nigeria, saying, “The Bida/Lapai/Lambata road is completely bad. We sleep there for two or three days before getting to our destinations”. Let us bear in mind that Niger State produced two military Heads of State.

Furthermore, right from the days of Yar’Adua to President Buhari administration, the Kano-Katsina road is still work in progress.

Yet these are roads in the areas that have produced Nigerian Heads of State and I do not think they are pleased with the situation. It is therefore total ignorance or deliberate malice to argue that a lawmaker syphoned contract sums for South East roads when even successive CEOs (presidents) of Nigeria, who supposedly provided the funds, cannot boast of better roads in their regions and hometowns.

The hypocrisy of it all is that every South East State has produced a President of the Senate and continues to produce three senators every four years. Yet these armchair critics, who lash at Ekweremadu, a former Deputy President of the Senate, for failing to build world class roads in the South East and a kidney centre that could have treated his daughter, go mute when asked to showcase the ones built by Presidents of the Senate produced by their respective states or their successive representatives.

However, it has to be stated with every sense of modesty that Ekweremadu is in a class of his own as a representative in the infrastructural transformation of his constituency, Enugu State and more in addition to his millage in constitutional and electoral law reforms.

In fact, he drafted in his handwriting the widely applauded electronic transfer of results. In the wake of Ekweremadu’s present ordeals, former House of Representatives Member, Hon. KGB Oguakwa, said that although he was not particularly Ekweremadu’s friend and had not discussed with him for the past eight years, the lawmaker nevertheless stands out from the rest.

As could be seen, the poor state of our roads is a national and systemic problem not peculiar to any region. The root cause is our wrong road funding and governance models. Instead of concessioning our roads to the private sector, we are still depending on annual budgets, which are a far cry from reality and hardly released. When government announces award of a N10 billion road contract, for instance, it does not mean that N10 billion was released. Such funds are released to the Ministry in tranches and sparingly. Most times, completed parts fall apart before a new tranche is released. It is so bad that during budget defence in 2021, Minister of Works and Housing, Babatunde Fashola, called for embargo on new road contracts pending the funding and completion of ongoing projects.

He has underscored the challenges yet again in the ongoing budget defence at the National Assembly. He said: “The main challenge to highways development in the country remains inadequate funding. As at date, the government is committed to highway contractors to the tune of about N10.4trillion while a total of about N765billion are unpaid certificates for executed works.

“As at October 2022, the Ministry had a cumulative unpaid certificate in the sum of N765, 017,139,752.92 for ongoing highway and bridge projects. Apart from the pressure of resources to pay, there is the inadequacy of annual budget provisions where N100 million or N200 million was provided for roads costing N20 billion or more”.

The truth is that the only roads guaranteed to succeed as of now are those captured under the Presidential Infrastructural Development Fund (PIDF) managed by the Nigerian Sovereign Investment Authority (NSIA) because they do not depend on the unrealistic and yearly budget. They are notably the Lagos-Ibadan highway, the Abuja-Kano highway, and the Second Nigeria Bridge. By the way, it took the strategic thinking of Hon. Toby Okechukwu as the Chairman of the House Committee on Works in the 8th NASS and Ekweremadu to move the Second Niger Bridge from the stranded PPP arrangement with Julius Berger to the NSIA through the magnanimity of Fashola.

Besides funding, the initial serious flaw in the engineering design of the Enugu-Onitsha road by the Ministry of Works contributed to the delay in the reconstruction of that road. The built portions were collapsing such that even the contractors, RCC, were not willing to continue. The government had to either re-award it or redesign it. Ekweremadu and some other South East stakeholders preferred to have it redesigned than get an undurable road. In redesigning it, polymer, some level of filter (sand), cement, double binder (instead of the initial single binder), etc., were added. Anyone, who has plied the reconstructed portions, would attest to the difference.

Apart from the usual funding challenge, the summary of the story of Oji-Achi-Mmaku-Awgu road, is that the Federal Government awarded it to a contractor that lacked the capacity for such a challenging topography. Unfortunately, successive Ministers of Works neglected to annul and rearward the contract despite recommendations by successive National Assembly Committees on Works after each oversight visit. Only Fashola could take that bold step in 2018 and it was awarded to SETRACO Nigeria after ten wasted years. The great work done on that road since then is there for the world to see.

By way of epilogue, although sacks of tales are taken to the funeral of an able-bodied man, the good thing is that it is not yet Ekweremadu’s funeral, by God’s grace. Those hastily composing a dirge, hurrying to bury a breathing man will have to cloth themselves in long, flowing gowns of patience because God is still on the throne.

As Ekweremadu always says, the just shall be vindicated and the wicked will never go unpunished.