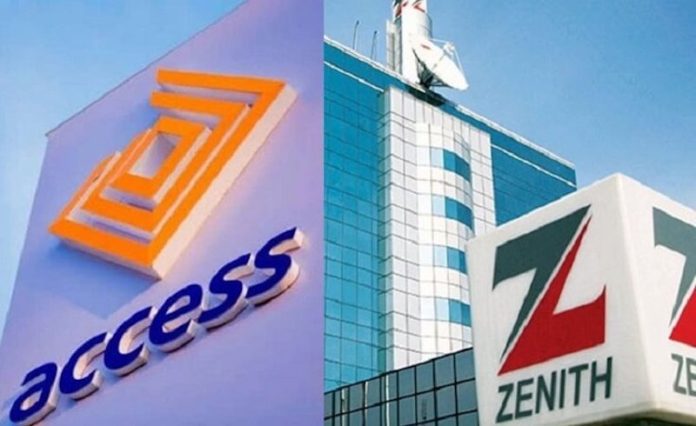 Nigerian banks have continued to be resilient in the face of the economic crisis that is confronting the most populous black nation in the world. Amid rising expenses due largely to high cost of energy, weakening Naira, insecurity, among other factors, leading lenders in the economy (Zenith Bank Plc, Access Corporation Plc, United Bank for Africa Plc, GTCO Plc and FBN Holdings Plc), increased their profit by average of 16.5 percent and increased lending (loans and advances) to their customers to N16.99 trillion, up 14.03 percent in the nine months financial period ended September 30, 2022. BAMIDELE FAMOOFO reports.

A review of the third quarter unaudited financial performance of leading banks in the Nigerian economy, carried out by the board of analysts of The Point Newspaper at the weekend showed that the banks: Zenith Bank, UBA, GTCO, FBNH and Access Corp are not stagnated by the hazy economic weather of the country as they still managed to deliver sumptuous profit for their shareholders.

For the shareholders of these leading five banks, the prospect for a reasonable dividend from their investments at the end of the financial year ending December 31, 2022 is bright as revenue and profit increased appreciably as at the end of third quarter with Earnings per Share on the rise.

On the aggregate, based on the unaudited financial reports for nine months period ended September 30, 2022, made available to their investors and stakeholders on the platform of the Nigerian Exchange Limited, recently, the five banks reported a joint profit of N649.02 billion, representing an increase of 16.5 percent (average) compared with N557.33 billion posted by the leading banks at the end of the third quarter period in 2021.

Breakdown of how the banks stood on the profit chart showed that FBN Holdings Plc emerged the most aggressive among the five.

Zenith Bank Plc, however, was the most profitable bank in value terms with N174.33 billion, up 8.6 percent against N160.59 billion declared in the third quarter of 2021.

Access Corp and UBA Plc occupied the second and third positions on the profit table, with N137.01 billion and N116.04 billion, respectively.

There is evidence to show that rising inflation in the economy is taking its toll on the performance of the banking industry as average Operating Expenses of the five banks suppressed the growth in profit. Figures analyzed by the board of analysts of The Point showed that the leading banks recorded an increase of 21.5 percent in OPEX in the review financial year period as against an average growth of 16.5 percent in profit.

The five biggest banks in Africa’s largest economy, notwithstanding the increasingly difficult business operating condition in the country are not relenting in fulfilling their mandate to lend to customers as their gross loans and advances portfolio in the review period stood at N16.99 trillion as against N14.9 trillion recorded in the same period of 2021. FBN Holdings was more bullish in lending in the period with a 24.9 percent growth year on year in loans and advances portfolio. The bank gave out about N3.6 trillion to its customers as at nine months ended September 2022 compared with N2.9 trillion in 2021.

In absolute terms, however, Access Corp led the pack with N4.62 trillion (loans and advances to customers), up 11.1 percent when compared with N4.16 trillion doled out in the same period in 2021.

Zenith Bank and UBA followed Access Corp on the chart with about N3.88 trillion and N3.05 trillion, respectively. GTCO, being the most conservative with approving loans and advances to its customers, grew its portfolio by 2.2 percent year on year from about N1.8 trillion in Q3-2021 to N1.84 trillion in Q3-2021.

“For the shareholders of these leading five banks, the prospect for a reasonable dividend from their investments at the end of the financial year ending December 31, 2022 is bright as revenue and profit increased appreciably as at the end of third quarter with Earnings per Share on the rise”

Deposits portfolio
The five banks mobilised about N34.12 trillion as deposits from their customers in nine months, representing an aggregate growth of 15.08 percent year on year, when compared with N29.65 trillion collected in the same period in 2021.

Meanwhile, Access Corp has the most robust deposits portfolio as at September 30, 2022 with about N8.19 trillion in its kitty as against N6.95 trillion in third quarters of 2021.

UBA Plc and GTCO recorded about N7.03 trillion and N4.26 trillion deposits in the review period.

However, Zenith Bank is playing a catch up game on Access Corp with an aggressive growth of 20 percent year on year, in Asset in the review period. The bank had about N11.34 trillion in its Asset portfolio as at September 30, 2022 as against N9.45 trillion in 2021. FBN Holding’s Asset Portfolio stood at about N9.85 trillion in the review period while UBA Plc and GTCO followed with about N9.32 trillion and N5.81 trillion, respectively.

Interest income grew by 42.4 percent y/y to N370.36 billion as all contributory lines save for the income from loans and advances to banks (-19.9% y/y to N19.21 billion) recorded higher revenue.

The bank attributed the increase in the income from investment securities to the attractive yields in the fixed-income market.

Interest expense grew by 45.5 percent y/y to N107.85 billion as all the contributory lines increased during the period due to the bank increasing its total liabilities by 22.8 percent YTD to N10.03 trillion. Similarly, non-interest income (NII) rose by 10.0% y/y to NGN211.97 billion, underpinned by the growth in the income generated from fees and commission (+27.8% y/y to NGN100.06 billion) and gains on investment securities (+0.9% y/y to NGN91.44 billion). This expansion in NII, alongside the growth in net interest income, led to a 14.8% y/y increase in operating income to N457.78 billion.

The aforementioned, coupled with an increase in the net income from fees and commission (+21.1 percent y/y to N82.22 billion), offset the N25.61 billion loss from FX revaluation.

“The five banks mobilised about N34.12 trillion as deposits from their customers in nine months, representing an aggregate growth of 15.08 percent year on year, when compared with N29.65 trillion collected in the same period in 2021”

Access Corp
Access Holding Company Plc also known as Access Corporation, reported a gain of N350.71 billion from loans and advances given out to their customers in the financial period ended September 30, 2022.

Year on year, growth stood at 34.3 percent. Interest income rose by 21.5 percent y/y to N571.98 billion, aided by higher gains from loans and advances to customers.

Breakdown of interest income showed that cash and balances with banks stood at N8.27 billion, loans and advances to banks (+8.0% y/y to N12.38 billion), and investment securities (+4.6% y/y to N200.62 billion). Like other tier 1 names, drivers for the expansion in ACCESSCORP’s interest income are attributed to (1) risk assets creation as the loan and advances to customers grew by 11.1 percent YTD to N4.62 trillion and (2) an expansion in yields across the FI market. 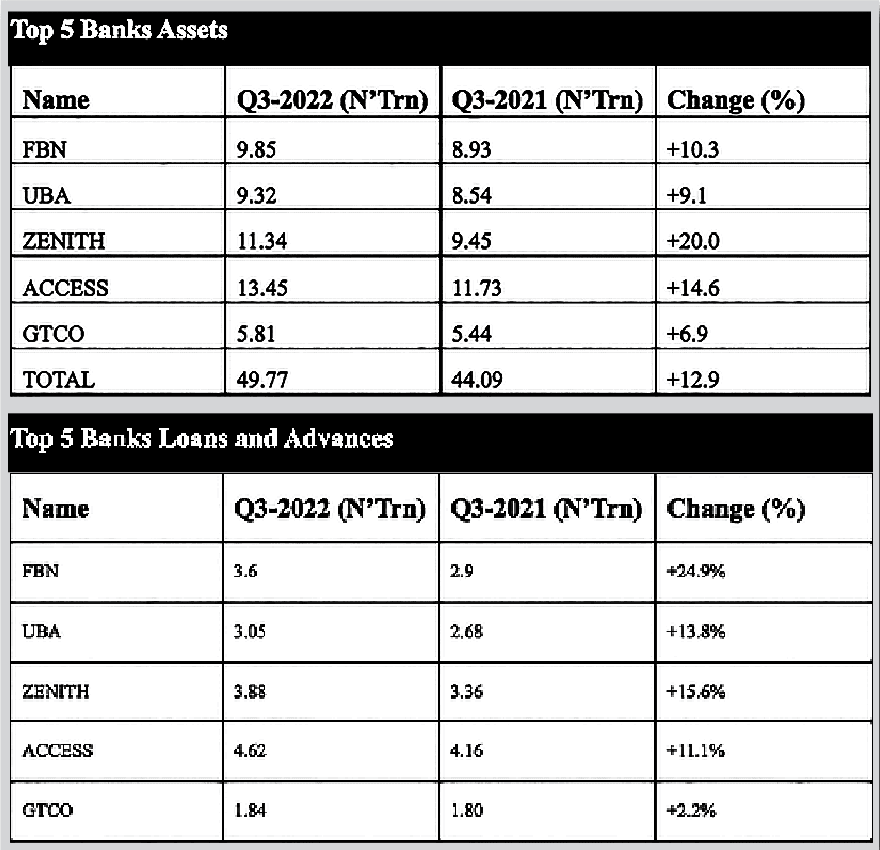 Remittances grow 5% in 2022, despite global headwinds