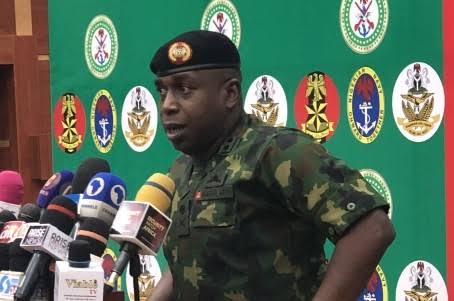 Troops of “Operation Hadin Kai’’ apprehended at least 79 terrorists and their collaborators in the Northeast in the last two weeks.

Director, Defence Media Operations, Maj.-Gen. Musa Danmadami, made the disclosure in Abuja on Thursday at the bi-weekly news briefing on the operations of the armed forces.

Danmadami said troops also eliminated many terrorists in land and air operations and rescued of 14 abductees including two Chibok school girls during the period.

He said the two Chibok girls, Yana Pogu and Rejoice Senki were rescued with their children.

He added that troops also apprehended a suspected ammunition technician at Gorom village in Monguno Local Government Area of Borno.

He had with him 300 empty cases of ammunitions suspected to be used for fabricating 7.62mm special ammunition

Danmadami said also that six suspected terrorists’ informants and collaborators including a foreigner were arrested at different locations.

“A total of 418 terrorists, including their families, who claimed to have lost interest in the ideology of Boko Haram, surrendered to the military.

He said also that between September 23 and September 28, the air component of OPHK carried out air interdiction operations at identified terrorists enclaves at Kolaram and Bukar Meram both in the Southern Lake Chad region of Borno.

He said the air strikes resulted in the neutralisation of several terrorists and their structures destroyed.

Danmadami said the airstrikes killed a suspected terrorists’ leader identified as Dogo Rabe and seven members of his gang, while others fled in disarray.

He also disclosed that troops of Guards Brigade, Nigerian Army, on October 1, apprehended 64 suspects who attempted to disrupt the Independence Day Celebration in Abuja.

Danmadami said the troops raided Karshi hill and surrounding villages in the Federal Capital Territory following intelligence on plans by the hoodlums to disrupt the Independence anniversary celebration.

He said the 64 suspects were youths that were dressed in black attire and armed with nine locally made guns.

He said the suspects were apprehended with 11 bags of substance suspected to be cannabis sativa.

“In another development, 33 suspected illegal miners were arrested at an illegal mining site at Gwagwalada Area Council.

“All apprehended criminals were handed over to the Nigeria Police, FCT Command for further action,” he said.

On the release of the remaining 23 Abuja-Kaduna train victims, Danmadami said the release was secured through non-kinetic means executed by the presidential committee.

He said the details of the release would be made public in due course.

In other parts of the North Central, Danmadami said the troops of Operation Whirl Stroke had on September 30 neutralised two terrorists in an encounter at Otukpa in Ogbadibo Local Government Area of Benue.

He said that some of the terrorists escaped with gunshot wounds.

According to him, troops also responded to a distress call about the activities of a bandit leader identified as ‘full fire’ and his gang members at Zaki Biam and Zamkara in Ukum Local Government Area of Benue.

“Troops also arrested one suspected bandit in his hideout, while a motorcycle and one round of 7.62mm special was recovered from the suspect.

Defence spokesman said the troops of Operation Safe Haven had between September 25 and October 2 apprehended 15 suspected kidnappers and bandits and rescued eight victims in different operations in Plateau. (NAN)