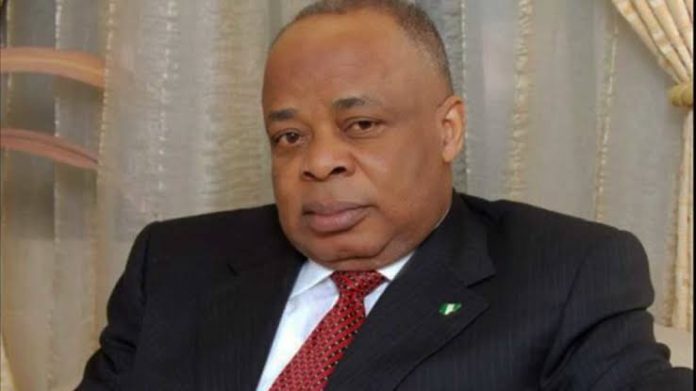 The crisis of confidence rocking the Enugu State chapter of the All Progressives Congress has taken a more fierce shape as the former Deputy Chairman, South, of the Caretaker Extraordinary Convention Planning Committee, Ken Nnamani led a team of party bigwigs from the state to the Buhari House National Secretariat of the party in Abuja on Tuesday to demand the sack of the State Chairman, Ugo Agballah.

The APC top shots in a petition submitted to the National Chairman, Abdullahi Adamu, stated that “The party in Enugu State recorded an unprecedented milestone of reinvention of itself during the last membership registration exercise.

“The party rebounded in goodwill as membership soared and the Party continued on this positive trend into the ward and local government congresses and was cruising towards taking away the shine from the ruling party in the state.

“A major crack, however, emerged during the State Congress, when Mr. Ugochukwu Agballah was surreptitiously manoeuvred into the party to become its State Chairman to the bewilderment and vehement opposition of a majority of the Party members who knew his antecedents as a person and in Enugu State politics.

The petition further stated that Agballah was given the benefit of the doubt by a few leaders of the Party and issued a Certificate of Return. It was felt by those few leaders that the Party needed to change direction at all costs and have a vibrant leader who could finally unite the Party in the State.

Unfortunately, the new Chairman did not waste time in proving those majority leaders who opposed his emergence correct in their warning.

According to the petitioners, “He immediately systematically dismantled the core of the Party structure and brought in his followers. He insulted the Party leaders, including those few who supported his emergence, sidelined them completely in matters affecting the running of the Party in the State and has been operating as a Sole Administrator or indeed a Dictator! The result has been the withdrawal from the Party of a growing number of important leaders and members.

“The Party is imploding and on the brink of imminent collapse. It is in no position as things stand, to be competitive in the general elections.

The leaders now believe that a radical solution is called for to save the state party from total collapse and disgrace (in the State).

“The aim is to unify the Party through the appointment of a Caretaker Chairman as the current Chairman has alienated and lost the confidence of the majority of the members of the State Party and its leadership.”

Nnamani and his team claimed that the Chairman has been removed by his Ward by an overwhelming majority.

“Very importantly, it should be noted that he has been lawfully removed by his Udi/Agbudu ward of Udi LGA of Enugu State on the 19th day of August 2022 by an overwhelming majority of party members in his ward. A copy of the resolution is hereby attached.

“This petition is written with a view of notifying the National Chairman and National Working Committee of APC of the state of affairs of our great party in Enugu State. As elders of the party in the state, we strongly believe that it is our duty to bring these anomalies to your attention for urgent remedial action. A stitch in time saves nine.

“We urge the NWC to immediately save the party in Enugu State from total collapse by removing Mr. Ugochukwu Agballah from office and in his place put a Caretaker Chairman who should be someone not within the present State Executive Committee. The party still stands a chance of remedying the situation and being competitive in the general elections.”

Reacting, Agballah said “To work with these men is to hand over our winning strategies to PDP as President Buhari found out belatedly in 2019 to his utter regret for it is only in Enugu that APC returned two percent. PDP knows we are sending them out of Lion Building come 2023. Since my assumption of office and nomination of the governorship and other solid candidates our membership has grown by over 700 percent and is growing daily.

“Prior to my assumption of office and nomination of Uche Nnaji as governorship candidate nobody has ever visited or campaigned in any of the wards above. My response is as follows. First from the day the convention ended I and Chief Uche Nnaji APC governorship candidate for Enugu State have been on tour of the 260 wards in Enugu State. We have not wasted one day. Below are the footages of the ward tour and no of the wards we have covered.

“Prior to Uche Nnaji’s nomination, nobody has ever given a dime to any ward. None of these eminent personalities have ever contributed one dime to the party at the state, local ward, zonal or national level.
None of them have been seen in their wards.

“Chief Nnaji has been sponsoring ward, LGA and State meetings since he indicated interest to run as governorship candidate. The truth is that we the State Executive asked all leaders and stakeholders to relocate from Abuja and go and strengthen their wards and none agreed. They want me to be holding meetings with them in Abuja, unfortunate I have relocated to the wards and have visited almost 180 wards as of today.”

The Chairman further disclosed that he has been abandoned by the eminent personalities who are now petitioning to demand his removal because they are APC in the day and PDP at night. “As of this minute am sending my report from Olo ward in Ezeagu LGA. These eminent personalities are all APC in Abuja and PDP in Enugu no wonder none of them has ever publicly condemned the bad-performing Ebeano cabal that has ruled Enugu for 23 years. Let them show or refer the press to a media report where they have ever done so.

“These eminent personalities and public office holders are mostly unknown in their various wards and do not participate in any APC activity in their various wards no wonder none of them won their respective polling booths in 2015 and 2019. If they did so I challenge them to present the result sheet to the press. I also challenge them to present evidence of their attendance in any meeting of their wards since Oct 2021 when I was elected State Chairman and when I insisted every stakeholder should attend ward and LG A meetings.

“That was why these great leaders could only return 2% of total votes cast in the 2019 elections. And they are at it again but they forget I have more experience than them all and will not succumb to their unnecessary distractions. My eyes are on the ball.”