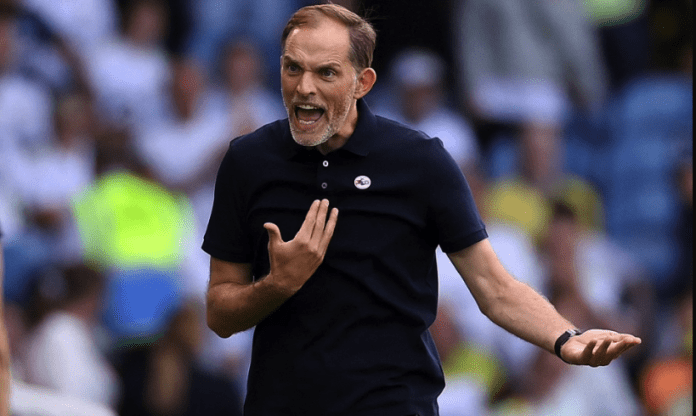 The pressure is now on Tuchel after his team’s poor start to the season, with Sunday’s loss following a lacklustre performance in the win over Everton and a draw with Tottenham where their rivals came from behind twice.

However, the German was defiant in his post-match interviews, insisting that his side were still the better team in the game whilst also partly blaming the result on Chelsea’s botched travel arrangements.

Tuchel said, ‘It started yesterday. We had no plane to arrive so we came on the bus. The players could fly but for the coaching staff it was a long ride on the bus. It continued today.

‘We lost the game in the first 20 minutes, where we were clearly better and had huge chances. A lot of touches in the box but we miss the target and do not take what we deserve.

‘We then stopped doing what we were doing good and it was even for 15 minutes and in those we gave two presents,’ he added.

The first of those ‘presents’ came in the form of Edouard Mendy practically assisting Aaronsen for the opener, with the Chelsea goalkeeper pressured into giving the ball away while trying to play out from the back.

The second came when Raheem Sterling fouled Harrison just outside the box, with Rodrigo easily scoring from the subsequent free-kick routine, and Chelsea’s misery was confounded when summer signing Kalidou Koulibaly was sent off late on after receiving a second yellow for a pointless foul.

Despite his side getting completely outplayed, Tuchel insisted that his side were superior, saying, ‘We were clearly the better team. They do what they do.’

‘I don’t see that a set-piece and own goal [Mendy’s mistake] are due to the style. They are mistakes.

‘If we give goals away like this that are totally unnecessary and when we are totally in charge we cannot win football matches. We tried second-half and I am disappointed we lost that half as well. They made the maximum of their half-chances and we did not,’ he noted.