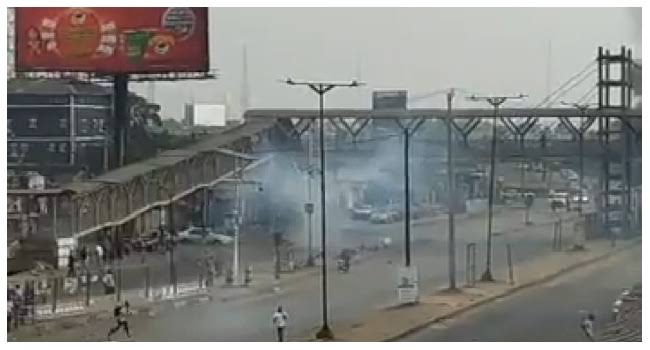 Two persons were said to have been killed during a clash that broke out between between some Yoruba Nation agitators and armed policemen at Ojota axis of Lagos State on Monday.

Some members of the Yoruba Nation Determination group were said to have staged a protest before it violent when some policemen reportedly dispersed them.

Two of the protesters were allegedly shot dead during the clash that ensued at about 8am on Monday at Ojota, close to Gani Fawehinmi Freedom Park.

Some of the protesters, said to be members of the Oodua Peoples Congress were seen in a viral video, lamenting the death of their fellow protesters, and accused personnel of the Nigeria Police of shooting them with live bullets.

One of the leaders of the demonstration, who was raising the alarm of the unrest in a video watched by The Point, identified himself as ‘Southi’, and made a video of one of the casualties and some policemen standing at the entrance of the Ojota Police Station.

The protester, who was wearing some items suspected to be charms, amongst others speaking behind him in the video, threatened to retaliate the death of the duo protesters by setting the police office ablaze.

Meanwhile, more teams of policemen had been deployed to the area to restore order.

The heavily armed personnel were armed to the teeth and strategically positioned alongside their trucks in the axis to maintain peace.

A black Maria was sighted by our correspondent and it was fully loaded with some people believed to be Yoruba Nation protesters who were arrested by the police.

Recall that in 2021, at Ojota earea of Lagos, there was an unrest following protest by Yoruba Nation agitators in which a young lady named Jumoke was killed.

However, as at the time of filing this report, Ojota area had been opened for vehicular movements as passersby move about in panic.