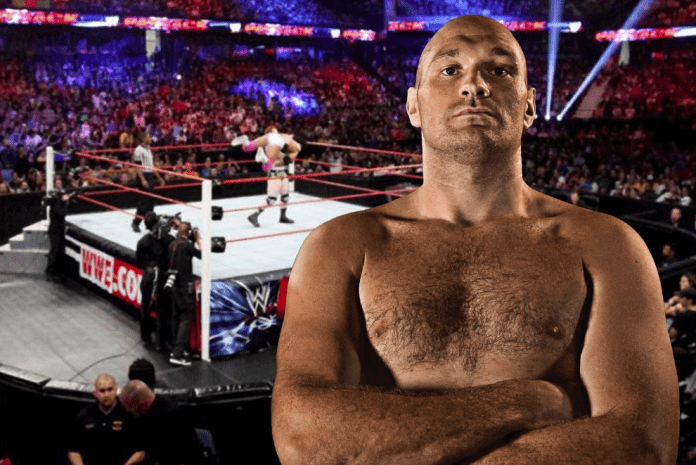 The Gypsy King – who was ringside for Clash At The Castle in Cardiff at the weekend – is no stranger to the world of wrestling, and he’s open to the idea of joining the company on a firmer basis in the future.

Speaking to newsmen after the huge Principality Stadium show, he said: ‘At the moment, I’m a heavyweight world champion and I have plenty of fights that I have to take in the next few years.

‘But I really have a passion for WWE, as you saw me at Crown Jewel and here and a couple of other events. Never say never, let’s just say, Triple H is here and I’d definitely be open to it in the future for sure.’

There will be plenty for Fury to sink his teeth into as and when he does get more involved, going back to his 2019 match with Braun Strowman and his three-year-long social media war of words with Drew McIntyre.

At the event, the boxing icon knocked out Austin Theory to stop him cashing in the Money In The Bank briefcase during the bout as McIntyre faced off with Roman Reigns for the Undisputed WWE Universal Championship.

The Tribal Chief retained his gold, with Fury first shaking the champ’s hand before joining McIntyre in the ring for a singalong.

Given his love for the business and those interactions, it’s obvious there is a lot of scope for him in WWE.

Paul ‘Triple H’ Levesque – the company’s head of creative and talent relations – also spoke to the media after the show and hinted there are some big plans on the horizon.

He added: ‘When Tyson Fury does finish his work inside the boxing ring, probably the entire time as the world heavyweight champion, retiring undefeated, but when he does that, the door is always open for him here, we’d love to do business with him.

‘We enjoy what we get to do with him now. Having him, and his family here is our pleasure. I know they mess with each other – I saw the look between him and Roman Reigns tonight.

‘When the time comes and Tyson Fury and I have that conversation, I can guarantee you this, we’re gonna have to build some bigger stadiums, somewhere, to hold that event.’