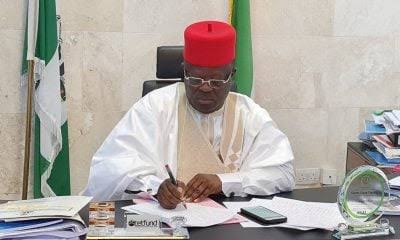 Ebonyi Governor, David Umahi on Monday presented a 2023 budget estimate of N139 billion to the State House of Assembly.

According to Umahi, the 2023 financial appropriation bill is tagged “Budget of Divine Mandate Consolidation and Continuity” and assured that his government would implement 41.67% while his successor would implement 58.33% of the budget.

“The budget estimate is a total of One Hundred and Thirty-Nine Billion, Three Hundred and Ninety-Eight Thousand, Two Hundred and Eighty Thousand Six Hundred and Forty Naira, only (N139, 398,280,640.00).

He further explained that the 2023 budget proposal is 4.13% less than the 2022 original budget, stressing that it aimed at addressing the challenges observed so far in the implementation of the 2022 actual budget.

He said that the proposed budget will commence the setting up of the two universities of ICT University at Oferekpe, Izzi and the Aeronautical University at Ezza in the state.

He restated the need for the budget to prioritize areas of Education, Health, Agriculture, Infrastructure and Human Capital development.

He announced that the 2022 Budget has been implemented to 75%, and expressed satisfaction that his administration was rapidly executing the 199-kilometre Abakaliki Ring Road project in the state.