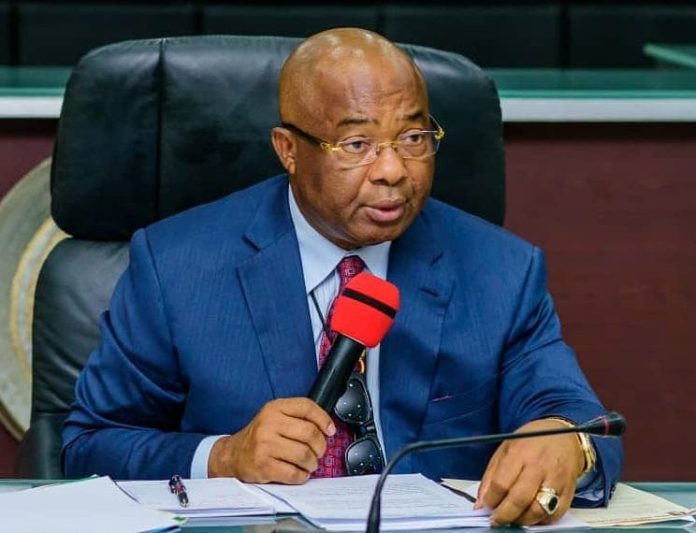 Governor Hope Uzodimma of Imo State has flagged off the bio-attendance system/verification exercise in Imo State with an assurance that no verified teacher will be owed a dime as salary every month or even made to suffer lack of promotion for working hard under his watch.

The Governor spoke on Thursday at the Admiral Ndubuisi Kanu Stadium Owerri where he personally supervised the collation of data – registration and image capturing – of secondary school teachers and non-teaching staff of the secondary School Management in Imo State from the 27 local government areas.

Addressing them before the verification that was coordinated by the staff of the Imo State Data Centre, Governor Uzodimma said the exercise became necessary to ensure that teachers receive their salaries every month and get their promotions that have lingered since 2014.

The Governor called attention of the teachers to the abuse of postings linked to most of them and warned against rejection of postings to any school in the State, especially postings to the rural areas except on verifiable health grounds or marital status.

He informed the teachers and their heads that they were invited to be physically verified and their image captured preparatory to final nominal roll that will be used for their monthly salaries and for promotion purposes.

Governor Uzodimma who also acknowledged the shortage of teachers in the state secondary schools assured that as soon as the nominal roll of teachers is streamlined new ones will be employed.

In his remarks, the Commissioner for Education in Imo State, Sylvester Okorondu told the governor that the secondary school teachers and staff of SEMB from the three zones of the State had gathered for capturing and for government to know their actual number which will help to streamline their monthly payments, promotions and eventually, retirement.

The Executive Secretary of SEMB, Adaugo Nwanebo thanked the Governor for adopting the process of automation in the MDAs that has made salaries to be paid to every teacher at the same time.

She highlighted that the verification will make for smooth storage of personnel data, prevent leakages and ensure that those who actually work for government receive their pay as “their data will be based on accurate information.”

On the side of management, she agreed that “the bio-data attendant will play a positive role in online personal and empirical management system.”

She thanked the Governor for the initiative and for accepting to flag-off the exercise.

Governor Uzodimma proceeded to supervise the exercise until the data of all the teachers from the 27 local government areas of Imo State were collated to the admiration of the teachers.