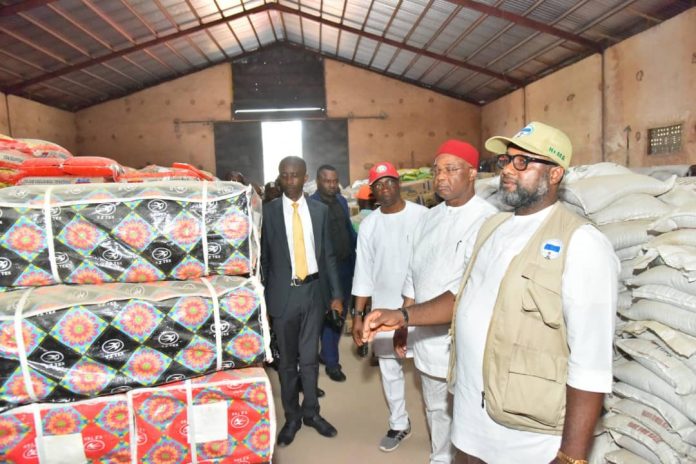 The Governor of Imo State, Hope Uzodimma has commended President Muhammadu Buhari for being kind-hearted and compassionate over the pains of the ordinary Nigerian.

Governor Uzodimma said this on Friday during the flag-off/distribution of the relief materials approved by the Federal Government for the affected persons by flood disaster in Imo State.

Addressing the audience comprising victims of the flood disaster and their leaders, the Governor said that in almost eight years of President Buhari’s administration, “Nigeria has never witnessed the level of social interventions to alleviate the sufferings of the common man as the one under Mr. President Buhari.”

He added: “President Muhammadu Buhari’s government has done something different from other governments by even paying those Nigerians who are not working, money and other allowances through various intervention polices. And most importantly, he crowned it all by setting up a Ministry of Humanitarian Services to deal with the issues of humanitarian challenges.”

Furthermore, the Governor commended the leadership of the Minister of Humanitarian Affairs and Disaster Management, Sadiya Umar Farouq for the good works she is doing in her Ministry, noting that “she has been severally in Imo State and in each occasion Imo citizens benefited from the various programmes she came with.”

The Governor noted that under the Minister’s watch NEMA has lived up to expectations.

Not done yet, Governor Uzodimma add that President Buhari with the Ministry of Finance and the Ministry of Humanitarian Affairs and the Nigerian Governor’s Forum have already set up a joint Committee to access the level of damage done to victims by natural disasters and that the committee members have been going round the States to know how best the Federal Government can intervene in alleviating the flood disaster and other disaster challenges in Nigeria.

He described described the relief materials received from the Federal Government as an interim measure and a palliative one to the victims and informed the audience that he had already directed the Office of the Deputy Governor to “coordinate and visit all the flood sites in Imo State, access the level of damage to Imo farmers, homes, the roads, and government assets, put them together on the board and draft a request that will be submitted to Mr. President.”

The Governor beliefs that when the President in his wisdom gives approval to the request, it will go a long way in giving permanent solution to the incessant flooding every year.

He seized the opportunity to remind National Emergency and Management Agency that Imo State is highly populated, especially the flood affected LGAs and passionately requested for more items to go round the victims.

He thanked them for what they have done so far, and appealled to the families and communities to take heart as “Government at both State and Federal levels have set up Committees as a matter of concern to ensure the people are provided with possible solution to their problems.”

To the farmers among the victims, the Governor assured that something is being worked out to get them back to farm ahead of the coming farming season so that the food scarcity already being experienced in some States will not get to Imo State.

Earlier, the Governor had described the day as significant, noting that when the incident occurred it was like all hopes were lost.

“The level of destruction occasioned by the flood in Ohaji/Egbema and Oguta Local Governments and other Local Governments of Owerri and Okigwe zones were so devastating and even the first assessment by those who witnessed the incident showed that it was a clear case that was above what a State Government can handle and it gave Government a serious concern.”

However, the Governor said that he refused to join issues on television or quarrel over where the disaster was more or less devastating because he knows that government has a system of knowing what happened and anywhere it happened.

He reiterated that the Federal Government has been wonderful and thanked them again for the wonderful interventions as well as those by the Civil Societies Organizations and other Donor Agencies who contributef towards alleviating the problems of the victims. And on the part of Imo State, he promised not to relent in taking care of the citizens.

Introducing the programme to the Governor, the Secretary to the State Government, Cosmas Iwu acknowledged that immediately the disaster happened, the Governor approved the procurement of food and non-food items as the first line of support and alleviation of the disaster and its effect to the victims.

He equally informed that the government of Senator Uzodimma had sent condolence messages to families of those who died as a result of the flood disaster and had approved further procurement of more relief materials as a show of care and concern, insisting that the Governor attaches importance to the welfare and plight of Imo Citizens.

In his remarks during the flag-off/distribution of the relief materials, Nnaji Ifeanyi, Head NEMA Operations in Owerri who represented the Director General NEMA, Mustapha Habbib Ahmed said that the relief materials are approved for affected persons of flood disaster in Imo State.

He acknowledged the initial efforts of the Imo State Government under the able leadership of Uzodimma for providing the first line of support to the affected population of flood disaster in the State.

The Management of NEMA also appreciated the personal donations of public spirited individuals and the “positive spirit” of the people for helping one another to recover from the flood disaster.

Present at the flag-off were the Deputy Governor of Imo State, Placid Njoku, the Chief of Staff, Nnadi Anyaehie, members of the expanded State Executive Council, Senator Osita Izunaso, the Secretary General of Ohaneze Ndigbo World-wide, Ambassador Okey Emuche, some Service Chiefs and traditional rulers of the communities and LGAs affected by the flood disaster.