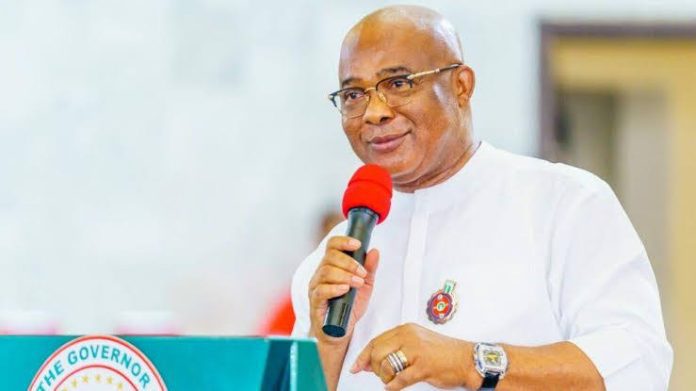 The people of Okigwe zone on Saturday held a rousing reception for Governor Hope Uzodimma of Imo State, caping it up with a chieftaincy title and also unanimously assuring him of their total support.

In a show of appreciation, Governor Uzodimma thanked the leadership of Okigwe zone for their thoughtfulness in finding him worthy of the honour and promised not to disappoint their reasonable expectation.

The event which took place at the Okigwe Township Stadium attracted the who-is -who from the zone that comprise six local government areas – Okigwe, Onuimo, Isiala Mbano, Ehime Mbano, Ihitte Uboma and Obowo.

Governor Uzodimma was crowned the Eze Chukwumere Eze Okigwe ( King crowned by God) by all the traditional rulers from the six local government areas that make up Okigwe zone.

In his opening remarks, Chairman of the occasion, Maurice Iwu said that Governor Uzodimma has demonstrated in no small measures his love for Okigwe zone and that no reception held in his honour could compensate for the good things the people of Okigwe zone have received from the governor since he mounted the saddle.

Iwu said that the reception was more or less an opportunity for his people to thank the governor for his love for Okigwe zone and to reassure him that they are with him in his journey to reposition Imo State for good.

The former Governor of Imo State, Ikedi Ohakim commended the governor for being a friend of Okigwe zone, specifically saying that “Okigwe supports Governor Uzodimma 100 percent and anywhere he goes, Okigwe will go.”

The Anglican Archbishop of Owerri Ecclesiastical Province, Most Rev. Dr. Onuoha prayed for peace both in Okigwe zone, Imo State, South East and Nigeria as a whole.

Earlier, the Secretary to the Imo State Government, Cosmas Iwu, had reminded the audience that Governor Uzodimma was the best thing to happen to Imo and that since he came on board, Imo State has witnessed unprecedented development due to the commitment, passion and sincerity of purpose of the administration of Governor Uzodimma.

In a welcome address presented by Ezechi Chukwu, Governor Uzodimma was lauded for being kind to Okigwe people but was, however, reminded that the zone does not have electricity while other infrastructure that adorn Owerri and Orlu zones are said to be lacking in the area.

Duru, for instance, urged the Governor to consider bringing the Faculty of Social Sciences or Law to Okigwe zone since the Faculty of Engineering that was originally proposed has not worked out.

“We need a functional general hospital in Ehime Mbano to improve health care delivery…. Okigwe is the least developed zone in Imo State. If not for the problem of funding, we would have requested the establishment of Okigwe Development Commission to bail us out of underdevelopment,” the address noted.

Regardless, the people said they are happy with Governor Uzodimma and his leadership style, adding, “we hereby declare that we stand with the Governor in whatever decision he chooses to do in the years ahead.”

In his remarks, Governor Uzodimma told the Okigwe leaders that he is not only one of them, but will stop at nothing to develop the area as doing so would give him joy.

Governor Uzodimma specially regretted the harm insecurity was causing Okigwe in particular and Imo State in general and assured the mammoth crowd of indigenes, friends and well wishers who turned up for the reception that going forward, the situation is going to change for good.