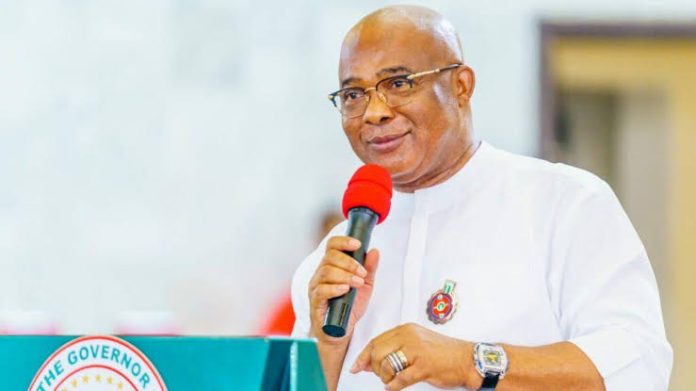 During the swearing-in ceremony at the Sam Mbakwe Executive Chambers, Government House Owerri on Wednesday, the Governor charged the new appointees to use their position to serve the people and drive the affairs of government.

The two Commissioners who took their oath of office on Wednesday are: Eugene Ukachukwu Opara and Jerry Egemba, while members of the House of Assembly Service Commission include, Lambert Orisakwe (Chairman), Emmanuel Orie, Israel Nnataraonye and Mike Nduleche.

In congratulating the Commissioners, the Governor said he is optimistic they would add value to his administration.

He urged members of the House of Assembly Service Commission to work in synergy with the leadership of the Assembly to restore order within the system and as it concerns the personnel.

He told the members to create a code of conduct that will direct the affairs and behaviour of workers in the House of Assembly and admonished them against anti-government practices while in office.

“The objective of this government is to serve and work until Imo State is recovered.”

He said though it is very expensive to activate all the institutions of government, but “Imo is setting a pace for others to follow, as doing so encourages efficient and effective governance.”

To the 27 Sole Administrators, Governor Uzodimma told them to go back to their Local Government Areas and immediately take over the affairs and ensure that the place becomes functional again.

He regretted that the non-functionality of Local Governments is the reason people complain of high cost of living, poverty, and diseases in our communities.

“If the LGAs are working poverty level will reduce to the barest minimum and the level of crime and criminality in the Communities and the society in general will come to naught.”

Governor Uzodimma assured the Sole Administrators of his government’s readiness to partner and encourage them in the area of vigilance services and security in their localities so that lives and property as well as investments of Imo people and visitors are protected.

Emphasising the need for the SOLADs to take their work seriously, the Governor said: “The way you serve in office in one or two months is the same way you will serve the State if you become governor.”

He expressed dismay over his observation that various departments in the Local Government such as Finance, Works, Sports, Social Welfare and Agriculture are no longer functional because the personnel do not work in synergy while the leadership does not care.

Governor Uzodimma said the ineffective nature of these departments has culminated into the premises of the LGAs being over-grown by grass and the environment so dirty that rodents and other animals have found the Secretariat as their abode.

He encouraged the SOLADs to escalate quality information on happenings in their localities to the State government for action, noting that “the government is now more prepared than before to deal with the criminals no matter whose ox is gored.”

He also challenged the Sole Administrators from the oil producing areas to work towards stopping crude oil bunkering and theft as a crime against the State and the Nation, insisting that “the activities of those thieves are against the National economy and the growth of the National wealth.”

“Please, let us take the interest of our people at heart.”

Governor Uzodimma admonished all the appointees to understand the need for prudent management of meagre resources and the need to maximally harness every resources for the benefit of institutions they represent.

The Governor equally said that his government will frown seriously against anybody who will bring in tribal, clannish, ethnic or religious sentiments into the Imo State government, noting that “we must have new Imo State that is focused on clear direction.”

In their vote of thanks, Eugene Opara ( for the Commissioners), Lambert Orisakwe (for House of Assembly Service Commission) and Willy Okoliogwu (for the Sole Administrators), unanimously appreciated the Governor for finding them “fit and worthy” to serve in their various capacities and promised to do their best to enhance the Shared Prosperity Government in Imo State.