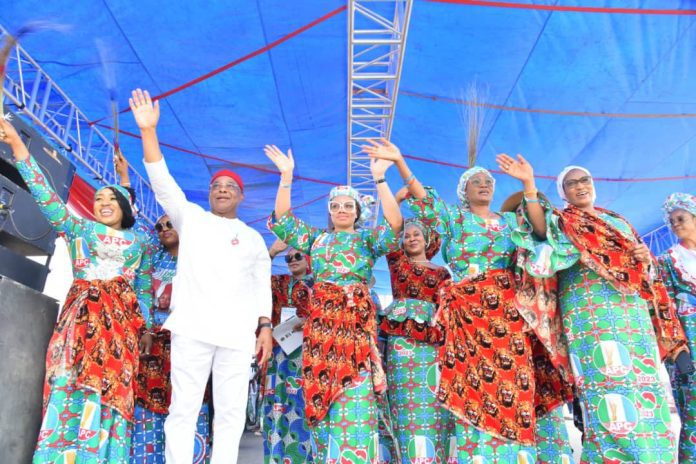 Governor Hope Uzodimma of Imo State has canvassed for mentality change from his brethren in the South East with regard to national politics, reminding all and sundry, particularly the womenfolk, that the time to take a decision that would affect them and their children positively in future, is now.

It was also an occasion where the First Lady of Imo State, Chioma Uzodimma, who is the South East Coordinator of the Tinubu/Shettima Women Presidential Campaign Team, told her colleagues that the APC has done well, hence the gains of the Party needed to be consolidated.

Mrs. Uzodimma therefore urged the women to vote for the APC all the way in the forth coming elections, insisting that the presidential candidate of the APC, Asiwaju Bola Ahmed Tinubu is a good man who has all it takes to consolidate the gains already recorded by the Party.

Mrs. Uzodimma told the gathering that the rally was a way of further stressing the need for women to appreciate the benefits that would come to them if they vote for Tinubu and his Vice, Sen Kashim Shettima, in the forthcoming general election.

She noted that in the almost eight years of the APC administration there are a lot of achievements to market the Party with and emphasized that “APC has performed well and Tinubu is a good candidate that will consolidate and improve on the numerous achievements.”

“With Tinubu and Shettima as President and Vice there will be increased women participation in government at all levels,” the Imo First Lady noted and charged the women not to be found wanting in the discharge of the most important duty of casting their votes for APC.

She then advised them: “Go and collect your PVCs if you have not and those whose PVCs are old should look for them and clean them up. The APC is a special breed which we must work hard to retain and maximize its advantage.”

Mrs. Uzodimma assured the APC women in the South East of victory for Tinubu/Shettima and all APC candidates in the forthcoming elections.

Adding his voice in support of the rally, the Governor Uzodimma called for a mentality change in the South East which he said, demands that “the South East politicians must not only think for themselves but for their children and their future existence.”

The Governor congratulated the women for pulling off the big rally, saying he came to greet them and to give them an inspirational message, that “it is time to take a decision.”

He reiterated that the South East has decided to embark on a campaign that will see her people at the centre of decision making in the country and to achieve same, they “have decided to be part of the greater Nigeria.”

“South East is better in the Nigerian Project. South East has decided to be part and parcel of Nigeria and there is no going back because of its numerous benefits.”

On the mode of campaign put together by APC, the Governor reiterated that there is no going back on the decision “to run a unified campaign that will carry all contestants along at the same time.”

Insisting that things will be easier for the women because APC is at the helm of affairs at the National level for now, he reassured of total win for APC in the South East.

Chairperson of the Tinubu/Shettima Women Presidential Campaign Team, and wife of presidential candidate, Senator Oluremi Tinubu, who was excited over the sea of women heads that graced the occasion, expressed surprise at the level development in Imo State under Uzodimma and urged the women to remain committed to the ideals of the APC in Imo and Nigeria.

She thanked Mrs. Uzodimma and the Governor for the mammoth crowd of women that attended the programme and singled out the Imo State Governor for appreciation for his huge support to the APC in the South East in particular and Nigeria in general.

Mrs. Tinubu enjoined Nigerians not to be deceived by the antics of those who believe that religion should be used to blindfold the people, saying that “Tinubu/Shettima are God fearing and will deliver on their mandate to make Nigeria better.”

She further assured that her husband will “give the women programmes on skills, equip those who will want to go into farming, improve education and most importantly, ensure that women occupy juicy positions in his government.”

“In their government everybody will have a say because everyone will be carried along.”

She prayed for peace in the South East which she said is inevitable as Tinubu has already identified the place as “industrial hub of Nigeria.”

In their brief messages, the APC National Women Leader, Betta Edu and the APC State Chairman, Imo State, Macdonald Ebere, assured the women that South East is intact for Tinubu/Shettima and all APC candidates in the forthcoming election.

Earlier on arrival, the Team had paid a courtesy call on HRM, Eze (Dr.) Emmanuel Okeke, Eze-Imo and members of his Cabinet at the Eze Imo Palace, Mbari Street Owerri, as mark of respect for culture and tradition and to inform him that they were in the State for the rally.

In her remarks at the courtesy visit, Mrs. Tinubu told the Imo monarchs that they came to seek for their royal blessings and prayers for the success of their rally in Owerri.

Receiving them warmly, Eze Okeke who is also the Chairman Imo State Council of Traditional Rulers commended them for thinking it wise to pay him the courtesy call and proceeded to bless them on their mission.

He reminded them that as traditional rulers they are non-partisan, but as citizens of Nigeria they know what is good from bad and will always be part of the good ones as reflected in Tinubu/Shettima.

Present at the rally were the Deputy Governor of Imo State, Placid Njoku and his wife, Bola, the Speaker of Imo State House of Assembly and the wife, members of the State House of Assembly, members of the Imo State expanded Executive Council, National Women Coordinators, South East Women Coordinators, some women Ministers and wife of the Speaker of House of Representatives, Mrs. Salamatu Gbajabiamila, among other important dignitaries.