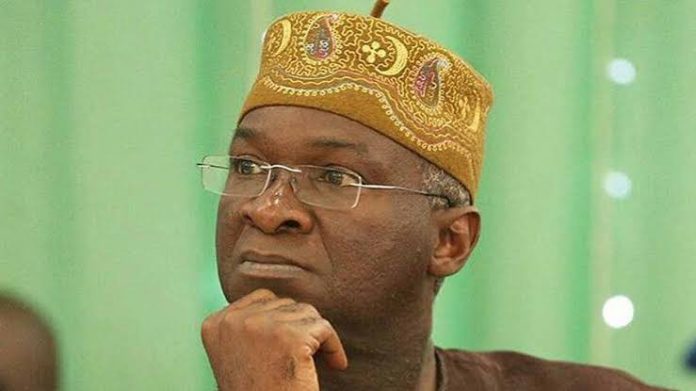 The Minister of Works and Housing, Babatunde Fashola, says Nigerian politicians can win elections in 2023 without exaggerating nation’s problems or disrobing her before global community.

Fashola made this remark on Thursday in Lagos while delivering a keynote address at TheNiche Annual Lecture with the theme: “2023 Elections and the Future of Nigeria’s Democracy.”

“We can win elections without exaggerating our problems. We can do so by offering credible service and well thought out solutions.

“We can win elections without disrobing our country before the global community. We can do so by ‘valorising’ Nigeria’s possibilities and not by widening her fault lines.

“Elections and democracy must represent for us, a feast of ideas and choices that bring out the best of us and the best of our country,” Fashola, a former two-term governor of Lagos State, said.

He said that though democracy heralded freedoms including the freedom to speak but many engaged in heckling, online trolling, hate, and in person verbal abuse in some cases or talk about ethnicity or religion.

The minister urged Nigerians to understand that choices have consequences as the nation moved to another electoral cycle in 2023.

According to him, shortly after the announcement of the results of the 2019 general elections proclaiming the victory of President Muhammadu Buhari, and whilst the opposition petition in the election tribunal was still pending, Nigerians had started talking of 2023.

Fashola said that rather than focus on what was going to happen in the lives of Nigerians as a result of the new mandate in 2019, some Nigerians were already thinking about the next election.

He said that Nigerians should do away with all detracting hype before elections but focus on how democracy, especially the 2023 elections, could make lives better and the country greater.

“Given that we are 20 days to the formal commencement of campaigns for the 2023 general elections, the 2022 annual lecture coming 170 days to the first of the elections in February 2023, provided a potential platform for many possibilities,” he said.

According to him, Nigerians must remember that democracy is simply concerned about the popular participation in choosing a leader or set of leaders.

He added: “Democracy does not guarantee that the leader or those leaders will deliver or indeed are able to deliver on what we want.

“Put conversely, what really is it that we expect from those we elect and what do they promise to do before we vote, and what have they done for us? Did we vote for, or did we collect tricycles, sewing machines, generators etc. from them?

“If we did, can we legitimately expect that the budget from which these things were procured will also provide healthcare, drugs and diagnostic equipment in our health facilities?”

He said the electorate must understand what the actual constitutional roles of legislators, local government chairmen, governors, and president are, saying most Nigerians were not familiar with provisions of the constitution and their responsibilities.

The minister, who noted that Nigerians remained the government, said that many critics of government failed to provide alternative to challenges facing the nation.

Fashola added: “Elections are only a part of the democratic process; and this requires not only the successful party to play their role in the formation and running of government but the opposition as watchdog, and government in waiting, has an equally important role to play in enriching the process.

“Governance in power is not easy, and I daresay opposition is even more hard work.

“Let us ask ourselves when last an opposition party prepared and detailed an alternative budget to that of the party in government.

He said that Nigerians must demand practical alternative in the run up to the 2023 general elections in order to sustain the future of democracy.

According to him, Nigerians should focus on the kind of people they will elect to states and federal constituencies because it is those people who will determine many things that will affect them.

He said that the media responsibility in shaping opinions remained huge, urging them to do more in focusing on conversations that would affect the majority of potential voters like issue of education, access to healthcare, water, electricity among others.

Earlier, the Chairman of the occasion, Tanko Yakasai, who spoke on “Nigeria at the Cross Road, the Challenge of Post 2023” said Nigeria was currently at the crossroad.

Yakasai, a human rights activist and former liaison officer to late President Shehu Shagari, said: “There is the overwhelming consensus that the political leadership under the current federal system is far from being optimal.

“The democratic government which ideally should serve the people and build enduring institutions had only succeeded in creating a generation of oligarchs and political entrepreneurs running the country as a private undertaking and not a federation responsible for the wellbeing of over 200 million people.”

He decried that though Nigeria was resource endowed, many Nigerians lived in poverty among other challenges, calling for political will to reverse the trend.

In his remarks, Eze Chidume Okoro, the royal father of the day, said that the greatest gifts the current administration should bequeath to Nigerians were to ensure that the 2022 elections worked and Nigerian votes counted.

Okoro, the former deputy chairman, Imo state Council of Traditional Rulers said: “We have opportunity in the next election to change the narrative if the votes will count.”

Sonaiya, speaking on behalf of recipients of the awards, commended TheNiche for the recognition, promising that the recipients would live up to expectations.

“TheNiche will always anchor its position on the need for social justice, fairness and respect for human and communal rights.

“The newspaper will be uncompromising against any form of discrimination and subjugation either by tribe, gender or religion.”

He said the timing of the lecture itself was also deliberate because from September 28, exactly 20 days from today, campaigns would start according to INEC timetable and six months thence, Nigerians would go to the polls to elect new leaders in what promises to be consequential elections.

He said the idea of the lecture, therefore, was to remind Nigerians beforehand that elections have consequences

“Indubitably, Nigeria is at a crossroads politically, socially and economically. The decisions the over 96 million registered voters will take in February 2023 will determine where the country goes from here.

“This lecture, our modest contribution to nation building, is one of the many interventions in the coming weeks that will, hopefully, help in pointing out the right way in the best interest of Nigeria.”