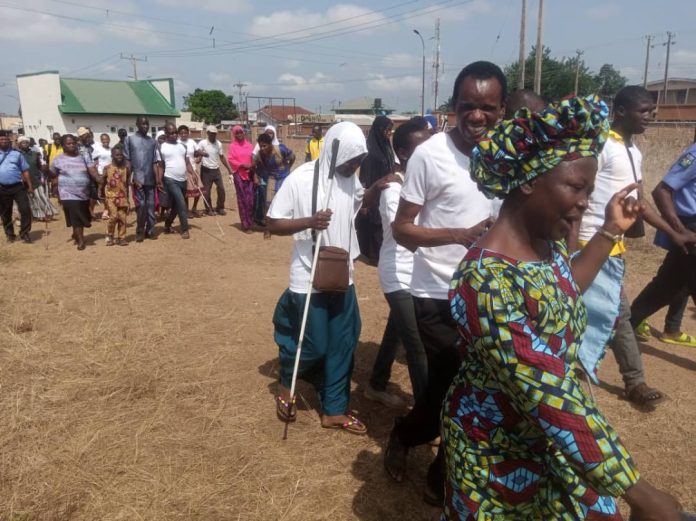 Members of the Nigeria Association of the Blind, on Wednesday, urged Governor Gboyega Oyetola of Osun State to write his name in gold in the few days his administration has by ensuring the domestication of the National Discrimination Against Persons with Disabilities (Prohibition) Act without further delay.

The virtually-impaired citizens of the state also appealed the state governor to grant them scholarships and also provide job opportunities for them, saying that they couldn’t beg for alms.

They made these known during this year’s celebration of the International Cane Day in Osogbo.

The blind people, led by their guides, held a rally from Government Annexe at Oke-Fia and marched to Technical College, while the police and road safety operatives offered them protection song the road.

As part of the activities to mark the event, the youth wing of the blind association had a friendly football match with their counterparts from Oyo State at the Technical College football pitch. Oyo team defeated Osun with two goals.

Speaking during a lecture on the theme: “The Virtually Impaired and the Safety Cane,” the Chairman of NAB, Osun State chapter, Comrade Akinsola Adekunle, commended Oyetola for the support they have received from him so far, but urged him to accelerate efforts on the domestication of the disability act.

“We thank Governor Oyetola for what he has been doing but we need more support. The National Discrimination Against Persons with Disabilities (Prohibition) Act has provided solutions to our challenges and that’s why we are calling on our governor to write his name in gold in the few days he has in office by ensuring that this bill is passed to law in Osun.

“We also want Nigerians to support the blind by offering them assistance in the public places. We want them to know that we are part of the society and we have a lot to offer. There is ability in our disability and we want the government to provide job opportunities for blind people that are qualified.

“There are lot of educated people among us. We have lawyers, journalists and other professionals among us and all they need is encouragement and support. In Osun, we don’t have blind school, we need one,” Adekunle said.

Another member of the association, Sunday Adegbile, called on well spirited Nigerians to rise to the aid of the virtually impaired by offering them scholarships.