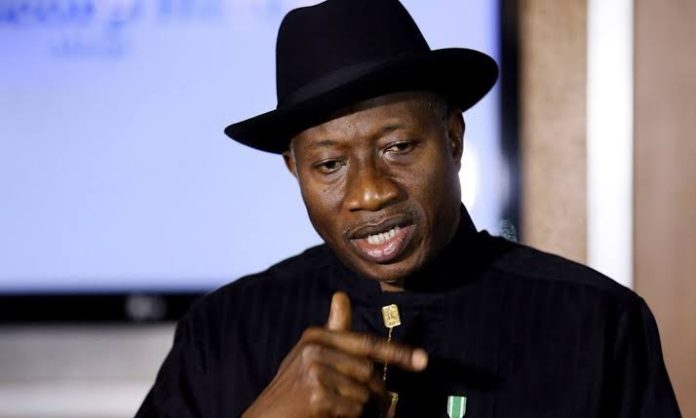 Former President, Goodluck Jonathan has advised Nigerians to be circumspect in exercising their voting rights in 2023 general elections.

Jonathan gave the advice while delivering a keynote address at the one year memorial summit in honour of late Captain Idahosa Okunbo, in Abuja on Saturday.

He said that 2023 should be seen as avenue to elect the kind of leadership Nigeria deserved now and in the future to assume its rightful place among the comity of nations.

“Ahead of 2023 elections, we are getting ready to be wooed and wowed at campaign grounds by various politicians seeking different offices.

“But these thoughts are beyond 2023. It is about Nigeria and the kind of leadership it deserves now and in the future to ensure that our country assumes its rightful place among the comity of nations.

“My charge to Nigerians is to be circumspect in the exercise of their voting rights.

“We must shift away from the politics of bread and butter and ensure that we do not elect leaders that will buy our conscience today and mortgage the future of our children and grandchildren.

“We should endeavour to elect only those that will leave legacies of unity, peace and development,” Jonathan said.

The former president in his keynote titled ‘Lasting Legacy: Key to Nigeria’s Development Issues’, said that in spite of all Nigerians had gone through, he did not believe that they should lose hope.

Jonathan said that every political cycle provided Nigerians with the ample opportunity to take decisions that would help them renew their hope, restore what had been lost and rebuild the country.

He advised political leaders at all levels to deliberately make the necessary sacrifices that promote patriotism, inspire devotion and spur citizens to do their best for their country.

He also charged political leaders to be concerned about the depth of their footprints and the kind of legacies they are leaving behind.

“Those who also lead at various capacities in politics and business, be they councillors, council chairpersons, governors, lawmakers at both state and national levels as well as boardroom gurus, should be bothered about the value of their leadership style.

“The essence of leadership is to drive initiatives that seek to build sustainable societies and make the lives of the people better and more meaningful.

“Every political leader should, in a moment of introspection, spare a thought for the legacy he or she would leave behind.

“Will you be remembered as a deceitful leader, an ethnic bigot, religious fanatic or a nation builder that would leave lasting legacies for the people,” Jonathan said.

He said that anybody aspiring to public office should first articulate his own vision and philosophy of leadership.

He said that leadership did not necessarily refer only to a political office; it encompassed the kind of guidance people were given at every position of responsibility.

“I always emphasise that the seed of leadership should be sown in the family from which it grows to guide the society.

“Good leadership at homes, schools, communities, traditional institutions, as well as worship places will give birth to legacies that would serve as a source of pride and benefit to the rest of society.”

On Nigeria’s political evolution and development challenges, Jonathan said the nation and its leaders could not afford to lay undue emphasis on its ethno-sectional coloration.

He said that emphasis should rather be to harness and rally the fine points of its diversity for positive growth and development.

Jonathan who believed that the legacy of nationhood and roots of unity were weak at Nigeria’s independence, said not much had been done since then to strengthen the base of the union.

“Nations grow on the back of lasting legacies left by successive leaders.

“Our founding fathers may have offered their best efforts and made their own mistakes in service to their country and allegiance to cultural identities, especially on the issue bordering on the unity of Nigeria.

“But we should be able to ask ourselves as current political leaders, what lasting legacies are we leaving for our children and grandchildren.”

Jonathan described Okunbo as a great industrialist who contributed considerably to the growth of Nigeria through hard work, discipline and perseverance, while he was alive.

“He will continue to be remembered by many, not only in his family and community, but across the nation, because of the impactful friendship and relationships he cultivated while alive,” Jonathan said. (NAN)