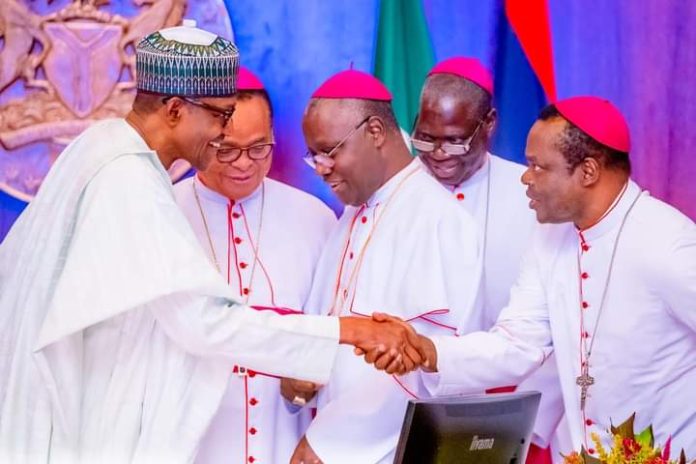 President Muhammadu Buhari on Wednesday in Abuja said the gains recorded in security will be further consolidated, and more attention will be given to the economy, before handing over on May 29, 2023.

Receiving Executive members of the Catholic Bishops’ Conference of Nigeria at the State House, President Buhari said the security situation had improved over the years, particularly in the North East where the focus had shifted to rebuilding infrastructure and re-orientation on education.

“I am very grateful for your visit to the Presidential Villa, and I agree with you on some of the observations you have made. The question of insecurity is most important to us because unless a country or institution is at peace, it will be difficult to manage.

“I just came back from Adamawa and Yobe States. During the visit to both states, I listened carefully to what the people and officials had to say. And they all said the situation had improved since 2015, especially in Borno State.

“Boko Haram was just fraudulent and a plot to destroy Nigeria. You can’t say people should not learn; the people need to grow intellectually,’’ he said.

President Buhari told the Catholic Bishops that the government will continue rebuilding infrastructure in parts of the country affected by terrorist attacks, while underscoring that terrorists had no control over any space in Nigeria.

“Some people have acknowledged the difference,’’ he added.

On the economy, the President said creditors had full confidence in Nigeria, with the capacity to utilize resources and repay loans before the approvals were granted.

“We are credible, that’s why the countries and institutions agreed to support our development with the loans,’’ he stated.

President Buhari said the destruction of oil facilities slowed the generation of revenues, and the government would be harder on saboteurs.

“If you look at the economy, we are trying hard to rely more on ourselves. Nigerians rely more on agriculture for livelihood, and we are putting in our best to enable more people, and diversify,’’ the President noted.

He said some of the challenges faced in the past, which include coups and counter-coups, and civil war, had prepared the nation for survival.

“We thank God that Nigeria is still one,’’ he said. “We should not forget that more than a million died for the nation to survive.’’

The President noted that he had been part of Nigeria’s history since 1967, fighting in the civil war, serving as governor, minister, Head of State, Chairman of Petroleum Trust Fund, contesting presidential elections in 2003, 2007 and 2011, before winning in 2015.

“We should thank God, and we should reflect on these things and thank God more,’’ he added.

In his remarks, the leader of the delegation and President of the CBCN, Most Rev. Lucius Iwejuru Ugorji, commended the President for reforms in the electoral system, making it more stable and fair, particularly the signing of the Electoral Bill into law.

“We commend and congratulate you for the efforts the government has put into ensuring real improvement in our electoral system and processes, especially your signing into law the electoral bill.

“Please do not relent in making sure that INEC and other relevant agencies of government carry out their serious duties to conduct peaceful, free, fair, and credible elections,’’ he said.

Ugorji urged the President to use the remaining months in office as Commander-in-Chief to tackle insecurity in the country, and improve the economy.

“The main crux of our message to you today is one of fervent appeal and strong encouragement. Your tenure of two terms as President, Commander-In-Chief of Nigeria, is drawing to an end. But we believe a lot can be done to turn things around for the better in the about four months left of your presidency before you step down in May 2023.

“We have seen some signs that the government is not entirely incapable of tackling the sad state of insecurity in the land, which has consumed thousands of innocent Nigerians across all religions, creed, and ethnic groups,’’ the cleric noted.

The Catholic Bishops presented a souvenir to President Buhari, containing a letter of encouragement and prayers for the forthcoming elections.