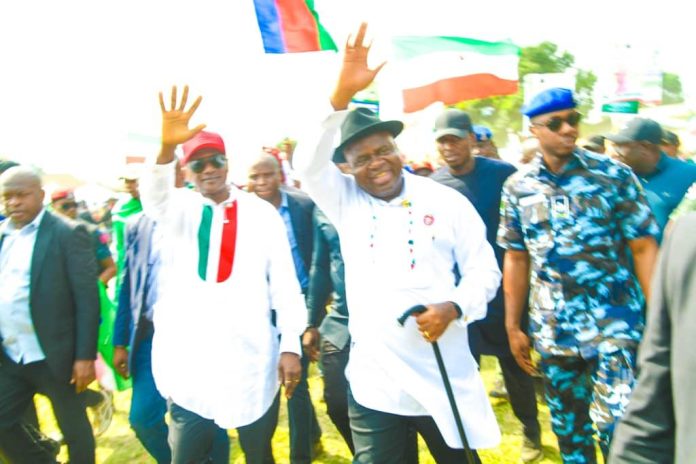 Bayelsa State Governor, Douye Diri, has restated the commitment of his administration towards developing and harnessing the economic potential of the aquatic environment of the state.

Governor Diri said this necessitated the ongoing construction of the three senatorial roads leading to the Blue Economy zone of the state.

Speaking in Twon-Brass Island, headquarters of the Brass Local Government Area during the flag-off of the Peoples Democratic Party, Bayelsa East senatorial campaign, the governor noted that the wealth of the state lies in the Atlantic Ocean.

He stated that his administration will do all within its power to harness the resources in the ocean for the benefit of the people.

His Chief Press Secretary, Daniel Alabrah, quoted him as assuring that his administration will not play politics with the development of the state.

He said the ongoing big-ticket Nembe-Brass Road in Bayelsa East was a testament to his administration’s seriousness to develop all parts of the state.

Governor Diri said as part of efforts to transform the state’s economy, his administration has increased the monthly grants to small business owners in all the 105 wards from N50 million monthly to N100 million.

He stressed that in line with the government’s policy to introduce skills acquisition into the state’s educational curriculum, it is constructing at least one technical college in each of the eight local government areas, including Brass.

The Bayelsa helmsman urged the people to support the PDP and its candidates at all levels in the general election.

He said “We told you we will not play politics with development of our state. That is why as tough as it was, we decided to embark on the construction of the three senatorial roads.

“Those who said they wanted a road to Brass, instead of starting from Nembe, they came to Brass and left it. How do you do that? These are people who play politics with our development.

“We are also building a local economy for our people. Every month we give out N50 million grants to small business owners in all the 105 wards in the state. Now we are increasing that sum to N100 million. We want our people to be involved in small businesses.”

Diri urged the Bayelsa electorate to vote for the PDP candidates in the presidential and all other levels in the February and March elections.

“From the presidential to the state assembly elections, please vote for PDP. You will not see Atiku (Abubakar) or (Marie) Ebikake on the ballot but you will see the umbrella. PDP will continue to bring development to Bayelsa State and Nigeria.”

The state PDP Chairman, Solomon Agwana, in his remarks, recalled how Nigeria prospered under the party before the All Progressives Congress came in and reversed all of that.

Agwana urged the people of Bayelsa East senatorial district to vote for the party at all levels to rescue Nigeria, describing its candidates in the zone as eminently qualified to represent the people.

He expressed the optimism that with the advent of BVAS, PDP will emerge victorious in the general election.

Also, Director General, PDP Bayelsa East Senatorial Campaign Council, Dr. Austin Dressman, and the zone’s vice chairman, Andi Obed, described the eastern senatorial district as home to the PDP and that the party will emerge victorious in the elections.