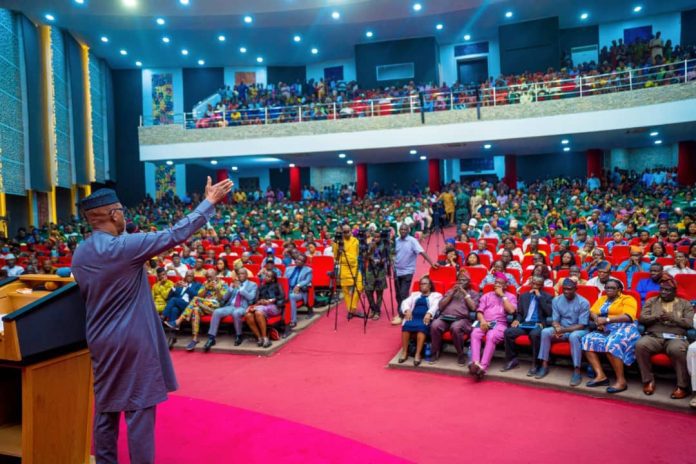 Ogun State governor, Dapo Abiodun, on Thursday, disclosed that his administration has paid the sum of N82billion as pensions and gratuities to state and local government retirees between June 2019 and June 2022.

The governor who disclosed this during an interactive session with a cross session of workers at the June 12 Cultural Centre, Kuto, Abeokuta, said that no payment was made for pension or gratuity in 2011, saying his administration had paid N41b as pensions and gratuities to state and local government retirees in less than four years.

Abiodun further stated that out of the N18b outstanding Global Deduction, his administration had paid the sum of N12bn, pledging that the balance of N6b would be paid in the coming months.

The governor who attributed the inability of his government to pay the deductions and other entailments, to increase in the wage bill of the state to N700m due to the implementation of the new minimum wage, said that his administration had in the last three and a half years explored various financial options rather than imposing additional taxes on the people.

“As you all know, our state was the first to implement the N30,000 minimum wage and this increased our monthly wage bill by N700m. This additional wage bill has affected our plan which was to settle all outstanding commitment with our work force,” he pointed out.

The governor announced that processes for the 2021and 2022 promotion exercise would commence very soon, pleading with the workers to be patient with his administration as their welfare remained paramount.

His administration, the governor noted, has been fair in distributing projects to all parts of the state, disclosing that the ground breaking of the Sagamu-Papalanto road would be performed next week to further open up the state for more economic activities and gain the confidence of the organized private sector.

“When we came in about three years and seven months now, we were clear on what to do which was creating an enabling environment for the private sector participation in the economy of our state which in turn will create individual prosperity.

“We set out to do this through our ISEYA agenda. We did not only focus on one area of the state economy, but all areas, we have renovated schools and health facilities; built about 300 houses across the state and constructed 400km of roads across. I can assure you that with your support, we will do more,” Abiodun said.

The governor described the Ogun State work force as the engine room that has helped his administration in recording the modest achievements, including winning various awards, calling for more partnership and collaboration to make the state better for the benefit of all.

Responding to questions from Aregbesola Olarenwaju, a staff of Odogbolu Local Government Area, on the poor working condition and the need for the third tier of government to have financial autonomy, Abiodun declared that his administration had not tampered with the local government funds.

He said his administration had rather augmented the LG allocations on a monthly basis to enable them meet their constitutional responsibilities.

On the issue of outstanding leave bonus raised by another worker, the governor said a portion of the bonus would be paid along the salaries from January, calling on the workers to give his administration more time to address all their outstanding issues.

Earlier in his remarks, the Head of Service, Nafiu Aigoro, said the interactive session was called to enable the workers have an interface with the governor on issues affecting the discharge of their duties and their welfare.