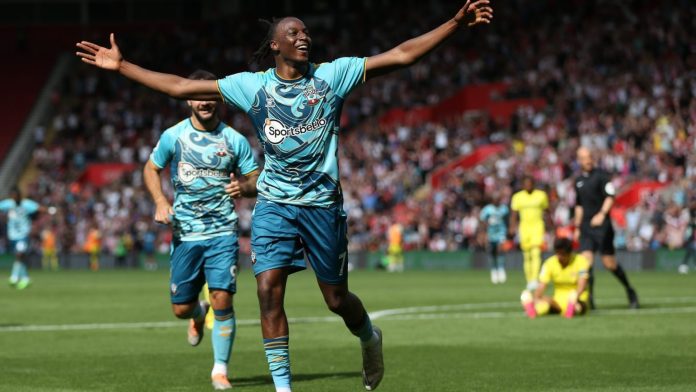 Ralph Hassenhuttl introduced the former Rangers man from the bench and it proved to be a big call as he helped lift the Saints’ morale before their comeback was completed.

Aribo scored Southampton’s first goal in the 72nd minute after latching on to an Armstrong’s cross, coolly beat his marker and took a shot with his right foot.

The Super Eagles star said he is surprised his first Premier League goal came off his right foot, and is buzzing that his contribution had a good impact on the game.

“I’m buzzing I was able to leave my impact on the game,” Aribo said.

”I’m happy I was able to help the team fight back.

“I think the fans stayed behind us even when it got to 2-0.”

Aribo is dominantly a left footer but got his first Premier League goal in his second game with his left foot and said he didn’t see that coming.

”Surprised I got my first Premier League goal with my right foot.”

The former Charlton Athletic star also had an opportunity to score ten seconds after coming on but he mistimed his decision.

”I thought I should have chested it and volleyed it but I keep learning.

(Southampton’s comeback) just shows what we are capable of. It shows the spirit, hunger in the group.“