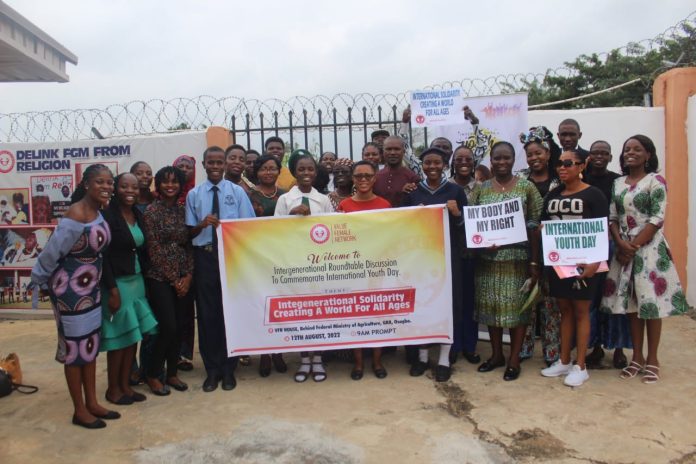 As the world marked International Youth Day on Friday, August 12, a Non-governmental organisation, Value Female Network held an intergenerational dialogue towards eradicating the illegal practice of Female Genital Mutilation in Osun State and Nigeria at large.

They all advocated against FGM and other harmful traditional practices that could hinder the progress of youths.

They warned against illegal and harmful practices such as FGM all forms of Gender Based Violence, rape and deprivation of human liberty and freedom saying that these inhuman acts deprive young people from reaching their potentials in life.

In their respective remarks at the programme, the representatives of these security agencies and other organisations, while addressing the theme of this year’s IYD: “Intergenerational Solidarity: Creating A World For All Ages,” called on governments, parents and guardians to pay more attention to young people and provide platforms for them to thrive.

Speaking, the Executive Director of VFN, Costly Aderibigbe-Saba, urged youths not to allow injustices and discrimination around to corrupt them adding that the programme was organised to celebrate Nigerian youths and also create a discourse on the need for stakeholders to shun FGM and other harmful practices.

Aderibigbe-Saba, who is also the Executive Secretary of the Global Youth Consortium on FGM, urged the Federal Government to encourage intergenerational dialogues and discussions to further intensify the fight against FGM and to also help birth SRHR service providers of different age ranges.

Addressing participants on the dangers of FGM, the first speaker, Zainab Agbolade, urged stakeholders to step down the training in their various localities and organisations stressing that FGM is deadly and inimical to the well-being of girls and women.

Handling the second speech session on the topic: “Strategies to Combat Sexual Reproductive Health and Rights (SRHR) Barriers Among Adolescents and Young People,” Ademola, the Executive Director of VARCE, urged parents to be cognisance of puberty changes of their girl child and also make their adolescents available to for sexual health services.

Similarly, a SRHR expert and Osun State Family Planning Co-ordinator from the State Ministry of Health, Mrs. Ololade Margret Abata said there are sexual reproductive health facilities at the ministry and urged parents and guardians to avail their adolescents the opportunity in order to prevent unwanted pregnancy, criminal abortion and infections that may result to infertility in the future.

Abata said, “The adolescents are very key to us because they are our future and we are trying our best to provide the best of services for them. So, the sexual reproductive health of the adolescents is necessary and I want to tell adolescents that they are welcome at all our facilities. We have trained providers that will provide sexual reproductive health services that they need. I also want to charge our parents at home to make sure that their girls make themselves available for these services.

“We know that there is a lot of information these adolescents gather from the internet but they need to have accurate information from us.

Their parents should be very friendly with them and get to know what they are passing through. So many times we judge them, we don’t need to. Adolescents are a very important aspect of society, we are looking at them as our future and the best we can do is to make ourselves readily available. We have our trained providers at the facilities and we want them to make themselves available and get adequate sexual information and services for them. A lot of things that surround them psychologically, medically and their health are very key to us.

“The government is providing materials needed for them. Some of them will go on and commit criminal abortion, which is not acceptable and we are losing lives. Day in, day out, many adolescents are losing their lives and the impacts of these criminal abortion and unwanted pregnancy will bring infections and at the end of the day, they will be experiencing infertility. So, we want to protect them and our future. So, our parents and guardians should encourage their adolescents to visit our facilities and take up the sexual reproductive services that are readily available.”

In his remarks, Oyetunde Olasunboye from the State Ministry of Health said all hands must be on deck to eliminate FGM.

While commending VFN for organising the dialogue to commemorate 2022 IYD, Oyetunde said, “It’s a laudable programme and it’s about ending FGM in the country, especially in Osun State. All hands must be on deck to achieve this mission. FGM is not supposed to be encouraged by anyone. There is a law against it already and we are working towards eradicating the menace of FGM so that it can be a thing of the past in our state. The government is doing everything possible. We are putting every framework together to ensure that this particular law is enforced, to ensure that there is a drastic reduction and elimination of this act. Many agencies and NGOs, like VFN, are already collaborating with the government to ensure that we get results. Various traditional rulers are already aware and they are working on how to eliminate this particular practice. We are hoping that by the next survey, the current survey that out Osun State as one of the states that have high rate of FGM would have reduced drastically.

“The youths are getting much more active in various aspects of society. Gone are the days when the youths are complacent and waiting for something to fall from heaven. Everybody is now demanding accountability and the youths are now active and making efforts to be part of governance.”

The Public Relations Officer of the Osun State Police Command, Mrs. Yemisi Opalola, warned residents of the state against acts capable of exposing youths to dangers and said that perpetrators of FGM and other illegal practices would be arrested and prosecuted according to the law.

In the same vein, the Public Relations Officer of the NSCDC, Osun State Command, Mrs. Atanda Olabisi, urged survivors to report cases of assaults, rape, violence and other harmful and illegal practices like FGM to the civil defence for action.

She said, “Stigma, family bonds society discrimination and self-shame are reasons why people find it difficult to report GBV or pull out of the court proceedings and also to protect the offender because he/she is a family member and opt out for alternative dispute resolution. I want to urge survivors to brace up and expose their abusers.”

An officer of the National Human Rights Commission in the state, Mrs. Jane Agbakwuru-Nzenwa, warned parents and guardians against domestic violence and all forms of human rights abuses adding that the commission would not spare culprits.

Speaking, Olufunmike Oyekunle, the project coordinator for the IYD said, “We held an intergenerational dialogue with various stakeholders in Osun State against Female Genital Mutilation and other harmful practices. We have people from the State Ministries of Education, Health, Information, young people, students of Secondary Schools, Universities, the Police, Civil Defence. It was an engaging and interesting dialogue. We hope that the fight against FGM would continue and by 2030, we would have eliminated FGM in Nigeria and world at large. We expect that everyone who attended this event would go back to their local environments, communities and organisations to advocate against FGM because we believe that these are the people that will have influence on the society and together, we can solidarise from all generations to tackle FGM.”