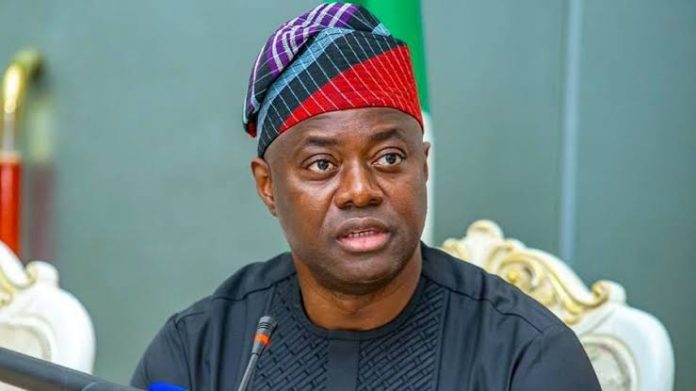 Oyo State Governor, Seyi Makinde, has clarified why he would not accept the chairmanship of the PDP Governors Forum.

He said he is fighting for issues that are fundamental to the peace and unity of Nigeria.

Makinde, who stated this in Aba, Abia State while commissioning the Nwaobasi ring and the Osaa Okea – Umuakatawom roads, explained that the PDP can’t restructure Nigeria if it is not ready to restructure itself first.

The PDP is currently facing an internal crisis with some demanding for the immediate resignation of the national chairman, Iyorchia Ayu so that the South West zone will produce the next chairman since the presidential candidate Atiku Abubakar is from the north.

To ensure peace within the PDP, Makinde had been tipped to chair the PDP Governors’ Forum.

In the same manner, the former chairman of the Forum Aminu Tambuwal of Sokoto State was penciled down to head the PDP Presidential Campaign.

These were said to be some of the major decisions taken on Thursday by the National Executive Committee and the National caucus of the party in the two meetings held Wednesday and Thursday last week.

According to the decision, Tambuwal is scheduled to operate in his new capacity as the Director General of the PDP Presidential Campaign Council.

It was gathered that Tambuwal is expected to resign as chairman next week and assume a major role in the campaign council.

National Publicity Secretary, Debo Ologunagba who read the communiqué of the NEC meeting, said that the NEC approved the organogram and the structures of the Presidential Campaign Council.

Ologunagba, who gave insight into the communiqué said, “NEC approved a unified campaign structures across the country for the PDP for the 2023 general elections which will focus more on the grass roots.

“NEC unanimously empowered the NWC to modify and adjust the structures of the Campaign Councils as and when the need arises.

“NEC received and approved the proposed structure for Zonal Reconciliation Committees to be set up to ensure that our party presents a common front ahead of the 2023 general elections.

“NEC also received and approved the composition of the Manifesto Review Committee to review the Manifesto of the PDP ahead of the 2023 general elections,” he said.

Though their nominations have remained a wrapped secret, the former national chairman of PDP, Uche Secondus, in a congratulatory message to Makinde and Tambuwal let the news to the public space.

Secondus in a statement he signed, congratulated Governors Aminu Tambuwal of Sokoto State and Seyi Makinde of Oyo State for their appointments as the Director General of the Campaign Council and Chairman of PDP Governors’ Forum respectively.

He also congratulated the former Senate President, Adolphus Wabara who was elected the acting Chairman of the Board of Trustees.

Secondus commended PDP’s presidential candidate Atiku Abubakar, the National Executive Committee of the party for stabilising the party for victory in 2023.

The former PDP boss charged all members of the party to put all hands on deck for the eventual victory.