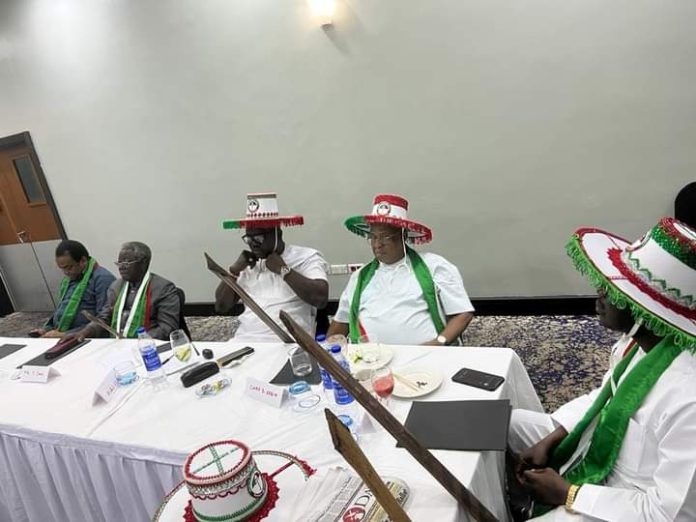 Five governors of the main opposition Peoples Democratic Party led by the Rivers State governor, Nyesome Wike, as well as former governors, leaders and elders of the party clamouring for the sack of PDP National Chairman, Iyorcha Ayu, on Sunday met in Lagos, declaring that they still stand on the position they earlier took in Port- Harcourt, just as they reiterated that the window for reconciliation in the party remained open.

The party chieftains made this known at the end of the closed-door meeting which took place at Southern Sun Hotel, in Ikoyi, and hosted by former Deputy National Chairman of PDP, Olabode George.

“After a careful review of developments in our party, we have decided to stand on the decisions we took in our Port- Harcourt meeting. And we hereby reiterate that the window for reconciliation in our great party, PDP, remains open,” Jang said in his very short remark.

Earlier before the meeting went into a closed-door session, Governor Makinde told newsmen that the party chieftains converged in order to review the situation within the fold and to also look at what was going to happen with the coming elections.

The G5, it will be recalled is agitating for the sack of the PDP National Chairman, Iyorcha Ayu, to be replaced by a southerner within the party, maintaining that the North cannot produce the presidential candidate and the national chairmanship of the party.

Makinde stated this as a reason for Lagos gathering in his opening remark before the meeting went into a closed-door session.

According to the Oyo State governor, the meeting was called to address the burning issues affecting the party, saying that the media would be briefed on the outcome at the end of the deliberation.

“The G5 is all about Integrity Group, you can see us as serving governors, as the face of the struggle, but the leaders and elders of the party that you see here are the people behind those faces, and we are here this morning, in the South-West to review the situation within the party, to review where we are and to also look at what is going to happen with the coming elections.

“And at the end of our deliberation, you would be briefed on where we stand on those burning issues and on behalf of all our leaders and elders within PDP in South-West, I want to welcome all the members of Integrity Group to a fruitful deliberation,” he said.