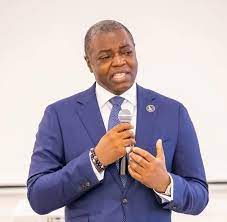 The Young Progressives Party has inaugurated its 2023 presidential campaign in Abuja on Friday where it announced a strategy to revive and restore Nigeria’s economy.

Its presidential candidate, Malik Ado-Ibrahim, listed his campaign cardinal agenda as the economy, power and security.

“My administrative power resolution is based on a tripod of grid expansion, energy mix solution and rethinking power generation and distribution.

“In my quest to address insecurity, my administration will provide a holistic approach by revamping and reassessing associated economic issues that could improve the security architecture of the country.

“My administration will also elevate the Nigeria Security and Civil Defence Corps (NSCDC) to a National Guard and I will retool, reorient and reposition the army to achieve its mandates,’’ he said.

Ado-Ibrahim added that his administration would also establish a Coast Guard in line with internationally-recognised procedures and that it would rely on the use of modern equipment.

He said that the goal was to evolve a renewed Nigeria where young men and women would thrive.

He said he would tour the country alongside his running mate in the next four months to share his vision and mission with Nigerians on the need to reset Nigeria for a new beginning.

Ado-Ibrahim charged Nigerians to hold him accountable to his promises after electing him into office.

In his remarks, Ado-Ibrahim’s running mate, Micheal Kasarachi, urged YPP supporters, members and Nigerians to support him and his principal on the mission to reset Nigeria.

Kasarachi said that his principal remained the most credible alternative with an evidential working manifesto that could be adopted and implemented immediately he emerged winner at the presidential election.

“Mr Ado-Ibrahim is not in the 2023 presidential race because of money or idleness, but because of empathy for Nigeria and for Nigerians.

“I am privileged to accompany him to achieve this dream of restoring Nigeria.

“He is experienced with vast knowledge and is an expert in the most critical sectors that burden our country,’’ Kasarachi said.

In another contribution, Bishop Amakiri, YPP National Chairman, represented by YPP National Secretary, Vidiyeno Bamaiyi, called for relentless support for the party and its presidential candidate.

He said that there was a need for strong internal party synergy amongst members and stakeholders, with the support of the general public to emerge victorious at the polls.

She promised to sensitise women and young girls across the country on YPP’s workable and doable manifestos and the need to support its candidate.