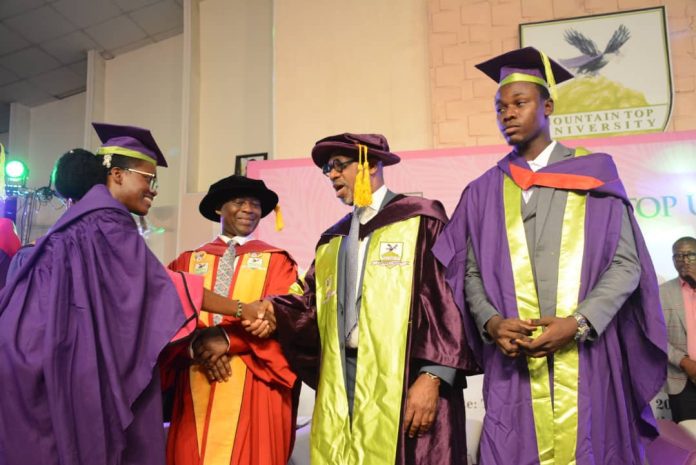 The Ogun State governor, Dapo Abiodun has said that Nigeria’s huge population of youth and not oil is the nation’s economic mainstay.

He also noted that a well nourished and developed youth are capable of launching the nation into global reckoning.

Abiodun who made this assertion in a lecture he delivered at the fourth convocation ceremony of the Mountain Top University, declared that Nigerian youth are knowledgeable, vibrant, with indomitable spirit.

He observed that though the nation is blessed with abundant oil, solid minerals and other natural resources, Nigeria’s wealth resides with the youths regarded as the future leaders.

Speaking on the topic “The Youth as Catalyst in Building Nigeria’s Future”, said “Let me say without fear of contradiction that we have a lot to be proud of but our attitude to our youths is not part of it. A significant dimension of our leadership predicament in Nigeria is due largely to the disenfranchisement of the Nigerian youth.

“I dare say that the statistical story of the Nigerian youth seems to have taken worse dive even with democracy. It is important for you, our youths to have faith and believe and for those who desire to change the equation and advance the course of our youth in business and politics.

“But more than anything else, do not let someone else create your world for you. For when they do, they will always make it too small and it may not be the world you want for yourselves”, he noted.

Abiodun charged the youths to channel their energies by exploring new frontiers in the different areas of human endeavours that would bring the desired development to all facets of the economy as they are the “new oil of the nation”.

The governor further admonished the youth to rally round themselves, empower others to achieve their potential as well as use their numerical strength from wherever they are, to identify and promote their own to take leadership both in economy and politics.

According to Abiodun, “Since youths are usually direct and indirect victims of mis-government and poor leadership, it is imperative for them not to wait to be crushed by policies of the state by others without their inputs, but partake in issues that affect them”.

He emphasized that youth are the foundation layer for the development of any nation, as they act as the driving force, through their vibrancy and tenacity.

He called on government at all levels to provide the platform for the youth to contribute to the development of the society, adding that as the future leaders, it is important to involve them in policy and decision making to prepare them for the task ahead.

While calling for the streamlining of admission in the universities and other higher institutions, the governor noted that they must continue to ensure adequate relationship between ‘town and gown’ and produce qualified personnel for the development needs of the society.

He maintained that youth empowerment remains a focal point of his administration, charging higher institutions to expose their students to entrepreneurship and mechanized agriculture, as the sector has capacity to provide employment opportunities, poverty alleviation and guaranteed food security.

The state helmsman called on the Mountain Top University and others to come up with a productive approach to produce youths that would sustain and increase the tempo of development and provide a solid foundation for the future.

The governor of Lagos State, Babajide Sanwo-Olu, who was represented at the occasion, said the school had made tremendous contributions to manpower development in the country and has set a standard in academic excellence in the country.

He charged the graduates to engage in solving problems and not be job seekers, commending Ogun State government for its efforts at putting the education sector on a sound footing.

In his remarks, the Chancellor, Mountain Top University and General Overseer of Mountain of Fire Ministry, Daniel Olukoya, while congratulating the graduands, noted that the school was set up to provide an all round education that would make its products compete favourably with the best anywhere in the world.

While admonishing them to take cognisance of all what they had learnt while in the school, Olukoya called on them to be good ambassadors of the institution and appreciated the parents for sacrificing to give their children and wards sound education that would prepare them for the task ahead.

The highlight of the event was the presentation of two million naira to the best graduating student, Miss Victoria Amaechi from the department of Biological Sciences with a GPA of 4.9