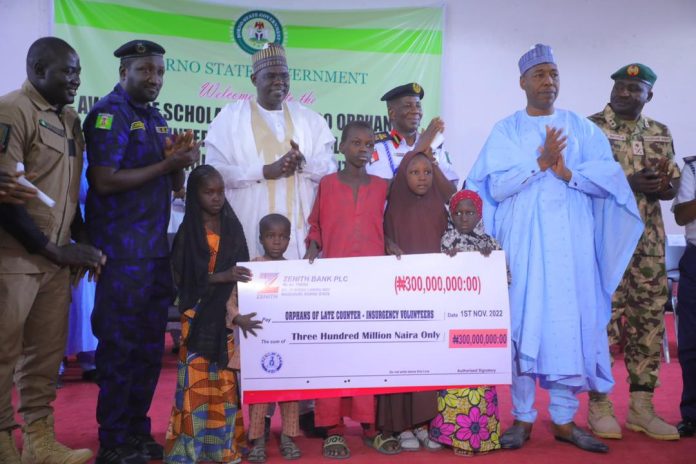 Borno State Governor, Babagana Umara Zulum, on Tuesday flagged-off a scholarship scheme worth N300 million in support of 300 orphans whose parents died as volunteers under the ‘Civilian Joint Task Force vigilantes and hunters.

The volunteers were involved with fighting Boko Haram and ISWAP side by side with the Nigerian military and other armed forces in Borno State.

Zulum at the launch, held at the multipurpose hall of the Government House in Maiduguri said the N300 million set aside was to cover all educational needs of the 300 orphans throughout their basic education levels, in the first stage, before further support at future levels of education.

Zulum had during his 2020 budget presentation promised support for the orphans under the “Borno Heroes Support Programme”.

Even before that announcement, he had on different occasions, granted support to volunteers at the front lines and to families of their colleagues killed at battles.

Beside the scholarship, Governor Zulum also approved livelihood support of at least N15m to mothers and other guardians of the 300 orphans.

Each of the 300 mothers or guardians received N50,000 along with a bag of rice, a bag of maize and clothing materials.

In separate remarks, Chairman of a committee set up by Zulum for selection of the 300 orphans, Kaka Shehu Lawan and the Theatre Commander of Operation Hadin Kai, Major General Christopher Musa lauded Governor Zulum’s initiative.

Kaka Shehu who is currently APC’s candidate for the Borno Central senatorial seat ahead of the 2023 election, was appointed while he was commissioner of justice whose ministry oversees affairs of the volunteers through a department dealing with public rights to safety.

Zulum had in June 2019, increased the allowance from N15,000 to N20,000 and change the payment system from a table to individual account which made the payment faster.

Governor Zulum also approved an end of the year bonus for all the volunteers.

By that, each volunteer is expected to receive additional one month salary as a bonus.