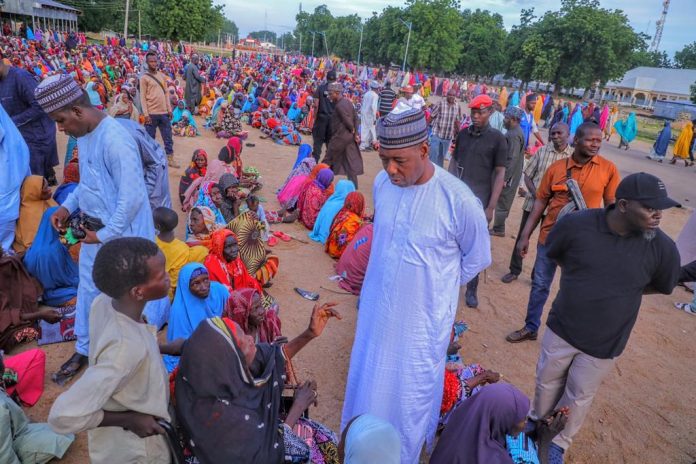 More than 90,000 vulnerable male and female residents as well as community groups on Wednesday in Bama, received combined sum of about N400 million alongside thousands of bags of food and textiles as humanitarian support and social protection on the second day of the visit of Borno Governor, Babagana Zulum.

Zulum arrived Bama on Monday as he approaches his third day of undertaking humanitarian and developmental activities.

According to a 2016 assessment report co-authored by the World Bank, the EU, United Nations and Nigerian Government, Bama is identified as the worst affected by Boko Haram’s destructions and displacement, hence Borno Government’s special attention on areas of reconstruction and humanitarian aid.

Governor Zulum, from 6:35am on Wednesday, flagged off the distribution in front of the Shehu of Bama’s palace amidst the gathering of thousands of beneficiaries.

The cash and food distributions took place at four locations.

Three of these were in Bama town and one at Gurusoye, a village on the outskirt of the town.

Governor Zulum was directly involved in coordinating the aid distribution to ensure substantial reach and transparency.

The governor also met and approved cash and food support to numerous groups including those of volunteers, elders, different levels of traditional rulers who help in intelligence gathering.

Various sums of money were released to the groups depending on their numbers in order to enhance access to livelihoods as residents gradually return to farming and other businesses, which were hitherto hampered by violent activities of insurgents.

Speaking to journalists in Bama during Wednesday’s activities, Governor Zulum revealed that substantial quantity of the food he shared came from the food launched by President Muhammadu Buhari as special support for the North-East, during the 2022 World Humanitarian Day which held on August 18 in Maiduguri.

He said the rice, in thousands of bags, came from the Nigerian Customs Service and the Federal Ministry of Humanitarian Affairs, Disaster Management and Social Development through its establishments: the North-East Development Commission (NEDC) and the National Emergency Management Agency (NEMA).

The governor conveyed his deepest gratitude to President Buhari, the Minister of Humanitarian Affairs, Disaster Management and Social Development, Hajiya Sadiya Umar Farouq, Comptroller General of the Nigerian Customs Service, Col. Hameed Ali (Rtd) and heads of NEDC and NEMA for their compassion towards Borno people.

Governor Zulum is constrained to use cash in humanitarian aids to communities because majority of Borno’s 27 local government areas currently do not have banking services while many of the targeted beneficiaries do not even hold accounts.

The governor’s spokesman, Malam Isa Gusau, in a statement emailed to journalists explained that banks currently operate mostly in Maiduguri, Jere, Biu and portions of Konduga that are located within the metropolis, while more than 20 LGAs do not have banking services following Boko Haram’s destructions and displacements.

Gusau also said that the incentives given by the governor has seriously worked against the ability of Boko Haram to use cash in wooing persons with critical humanitarian needs.

“There were times when Boko Haram used as low as N5,000 cash to pay spies and even pay teenagers to set schools ablaze. After careful analyses, the governor’s massive deployment of cash support was considered as potentially effective and it has really helped”, Gusau said.

He added, that “part of the whole idea is to stimulate local economies in communities through financial
transactions and to help the communities gradually stabilize. At the moment, some of the communities are returning to agriculture and other means of livelihoods and as they attain economic recovery, the governor will gradually change manner of interventions from direct sharing of food and cash aids to other means”, Gusau said.

The spokesman noted that Governor Zulum has regularly explained that distributing food and cash is not sustainable hence gradual return to safe farming, fish businesses and many other means of livelihoods peculiar to different communities across Borno State.