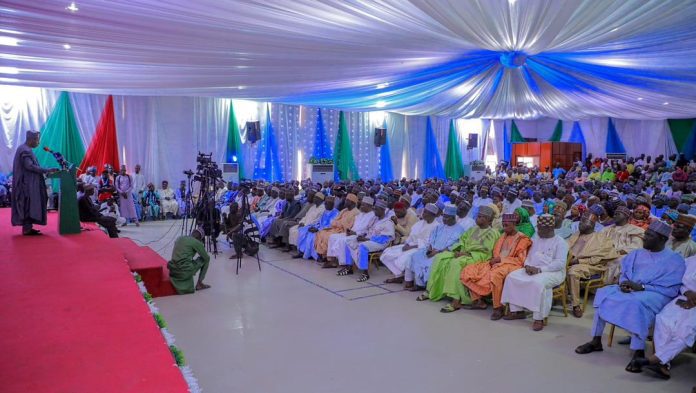 Governor Babagana Umara Zulum on Sunday inaugurated Borno State’s Campaign Council for the All Progressives Congress, APC, ahead of the 2023 general elections.

During the inauguration held at the multipurpose hall of the Government House in Maiduguri, Zulum reminded the campaign council of his ban against political thuggery and strongly warned that he was vehemently opposed to the use of political thugs at any point, before, during or after any elections.

Addressing the campaign council which was made up of APC’s critical stakeholders and top government officials, Governor Zulum raised issues surrounding the campaign visit of former vice president Atiku Abubakar to Maiduguri, on November 9, 2022.

“There have been recent disturbing and worrisome political developments in the state. I am specifically referring to the spate of violence and assault meted out to the PDP and its presidential candidate (Atiku Abubakar) when they came here (Maiduguri) for their campaign rally,” Zulum said.

“I want to put it on record that the assault was neither deliberate nor pre-planned. It was a spontaneous outburst by a coterie of some political party miscreants, cutting across all political parties.

“Suffice it to point out that what happened was despicable and unwarranted and it strikes at the very essence of democracy, which thrives and matures amidst the plurality of political parties. It has been posited time and again that any move against an opposition political party tends to raise the popularity of the opposition in the eyes of the electorate. So it is fruitless to even contemplate attacking the opposition. I have absolute confidence in the ability of security agencies investigating the matter to do justice, equity and fairness both to the victims and the culprit”, the governor declared.

Meanwhile, Governor Zulum at the council’s inauguration, said his administration had by Allah’s grace, succeeded in fulfilling most of the promises made during the 2019 governorship campaigns.

“Of the promises we made, masha’Allah we were able to deliver thousands of houses and shelter for our people, and were able to support consistently over 2.7 million people with food, funds and facilities to make their lives more meaningful. We built many roads in different areas of the state. We built more schools, hospitals, police posts, markets and many more”, Zulum said.

The governor added: “We promised improvement in security and by the grace of Almighty Allah, everyone can objectively verify that indeed the security situation has improved significantly. We are not going to rest on our oars. We plan to continue on this path of progress to consolidate the gains of the last few years of our stewardship.

“It is true that I could stand here for the next one-week listing and detailing all the things that we did during the first tenure that is coming to an end. To make it easier for people to track what we have done, you will see everything published clearly inside newspapers and other media of communication for ease of reference.

“Our projects are not paper projects. They are there for all to see. For us most importantly, we did not only build bricks and blocks, we fulfilled the promise of being with our people regardless of their location or situation. We visited all our local governments multiple times in good and bad times”, Governor Zulum recalled.

Earlier in his remark, the State APC Chairman, Ali Bukar Dalori, charged members of the campaign council to work towards delivering all the political units in the state to the APC.

Speaking on the composition of the council, Dalori said there were 22 strategic committees which included campaign council management and coordination, campaign patrons, campaign advisory, planning and strategic monitoring, finance and fund-raising, media and publicity, contact and mobilization among others.