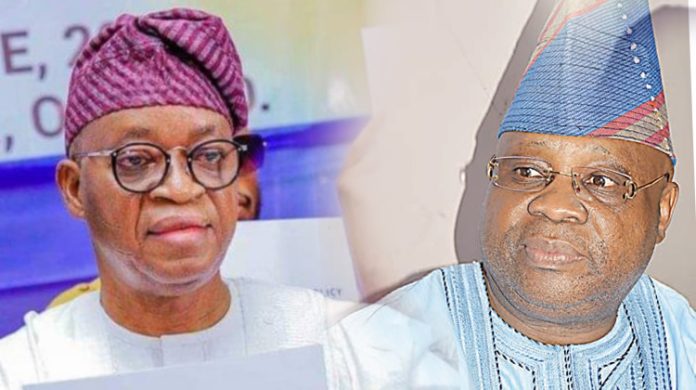 A week-long activities designed by the Management Committee for the swearing-in of the sixth Executive Governor of Osun State, Ademola Adeleke will start today, The Point has leant.

The Transition Committee set up by the People’s Democratic Party in the state will be addressing a press conference today to herald the ceremony.

Already, the Chairman of the committee, Bunmi Jenyo, had unveiled the week-long activities to usher in the administration of the new government in the state on November 27, 2022 amid strong expression of hope by the outgoing governor, Gboyega Oyetola, to reclaim his mandate through the court.

The Election Petition Tribunal has commenced hearing on the petition brought by Oyetola and the All Progressives Congress challenging the victory of Adeleke in the July 16 governorship election in the state.

According to Jenyo, the activities will be preceded by Muslim/Christian interdenominational prayers while a Public Lecture titled: “Light Upon Osun” will also be delivered by Emeritus Archbishop Lawrence Sanda Ayoladigbolu during the lineup of the activities.

While the week-long event will be rounded off with a Jumat Service and Inauguration Thanksgiving Church Service, other swearing-in programmes, according to Jenyo, include Novelty Football Match, “Inauguration Ball” and family prayers for Adeleke among others.

Jenyo added that, “In the same vein, people-focused social policy through skill based education, affordable health care, state security and social security support as well as agro-based industrialisation for wealth and job creation for youths and women, will in no small measure, transform our dear State from poverty into accelerated development and even delivery of democracy dividends to all and sundry.”

Meanwhile, The Point gathered that some notable officials of the PDP across all levels in the state, chieftains and family members of Adeleke had already acquired ankara uniform for the inauguration ceremony slated for Sunday, November 27.

It was gathered that the ceremony would cut across wards and local government levels as all members of the party and residents of the state who could not make it to Osogbo, would organise a mini celebration to rejoice while the main event would be held in the capital city.

Already, major hotels in Osogbo and other neighbouring towns have almost been fully booked to accommodate dignitaries from other parts of the country.

Notwithstanding these plans, the state government, as at the time of this report, was yet to react to the inauguration ceremony plans as the Transition Committee set up to interface with the outgoing government has claimed that it didn’t get cooperation from the incumbent administration.

Governor Oyetola has constantly shown in words and deeds that he is not losing hope on winning the election case in court.

This assurance was restated by Oyetola while addressing his kinsmen in Iragbiji during the 31st Iragbiji Day celebration in the town over the weekend.

Reacting, Adeleke chided Oyetola over his refusal to accept defeat at the poll and called on him to “stop hallucinating.”

In a statement by his spokesperson, Olawale Rasheed, Adeleke said Oyetola had no mandate to reclaim as he was soundly beating during the gubernatorial election.

Addressing Oyetola in the statement, Adeleke was quoted as saying, “You know you (Oyetola) are going. You are emptying the treasury and laying bobby traps for Osun people. Yet, you mount rooftop every now and then to deceive your gullible associates and accomplices in political banditry.

“Our message to you and your team is simple. This is your last week in Government House. Pack all what you want. But be rest assured that every official, elected or appointed, who partakes in the diversion of our common patrimony, will have their day before people’s panels of inquiry.”

However, Oyetola has been busy with commissioning of projects across the state, approval of appointments of traditional rulers and the tribunal case.

Impeccable sources in the state government house informed The Point that the governor, his deputy, and cabinet members have already been parking their belongings out of their official residences and offices.