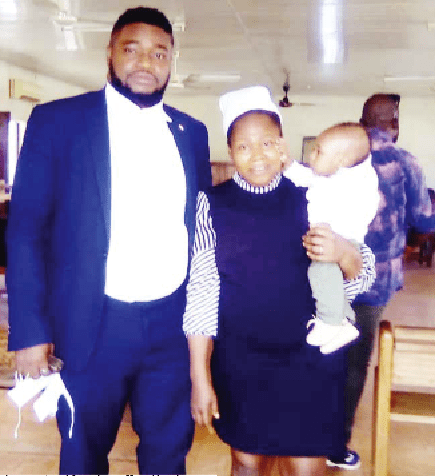 Ituma was said to have conspired with another staff of the bank, Comfort Orinya, to collect the sum of N1, 428,690 from depositors, but failed to lodge it in the bank’s coffers.

The charges brought against them read that “You, Orinya Comfort, aged 30; and Ituma Fideliis, aged 36, between 23rd of January 2019 and 6th of April 2022, at Monarch Microfinance Bank, Number 45, Ogoja Road, Abakaliki, did conspire amongst yourselves to wit: fraudulent false accounting and stealing and thereby committed offence punishable under Section 516A(a) of the Criminal Code, Cap 33, Volume 1 Laws of Ebonyi State of Nigeria, 2009.

“You (defendants) on the same date, place and under same Magisterial District, did with intent to defraud after receiving deposits from some customers amounting to total of N1,428,690 (One million four hundred and twenty-eight thousand six hundred and ninety naira) which was to your knowledge but omitted to credit same in the respective customers’ accounts with the bank and thereby committed offence punishable under Section 438(c) of the Criminal Code, Cap 33, Volume 1 Laws of Ebonyi State of Nigeria, 2009.

“You did steal the sum of N1,428,690 (One million four hundred and twenty-eight thousand, six hundred and ninety naira, property of Monarch Microfinance Bank and thereby committed an offence punishable under Section 390(6) of the Criminal Code, Cap 33, Volume 1 Laws of Ebonyi of Nigeria, 2009.”

The two accused persons pleaded not guilty to the three-count-charge of fraud and theft leveled against them.

However, Magistrate Happiness Chima convicted Ituma but discharged and acquitted the first defendant, Comfort Orinya, months after the case commenced.

Orinya, who was employed by the bank on January 4, 2019 as a marketer, was reportedly sacked on March 28, 2022 for getting married against the bank’s policy and for fraud.

Her counsel, Utibe Akpambang, explained that Ituma tampered with Orinya’s bank accounts leading to shortage for the bank.

In an interview with The Point, he said, “What happened was that my client was indicted for stealing in her former place of work, Monarch Microfinance Bank. While we were at the police station, my client made her statement and investigation was conducted. My client realized that her account was tempered with and was able to identify the signature of the person who tempered with her account which happened to be the second defendant (her supervisor).

“My client was the first defendant while her supervisor was the second in the suit. He tempered with some of her accounts and there was shortage, and the blame was on her.

“When the second defendant was brought to the police for investigation, he hurriedly paid the money that he owed. The company still allowed the second defendant to be working with them while my client was sacked on the ground that she got married and got pregnant. They said that in the marketing department, they don’t employ married or pregnant ladies.

“In the judgement, the court found my client innocent, and discharged and acquitted her, while the supervisor who tried to indict her was sentenced to 12-month jail term. I am satisfied with the intelligence of the Magistrate; she did her work well,” the defence counsel stated.

Orinya, who reportedly got married on September 2, 2021, claimed that there was no agreement between her and her employer to the effect that she had no right to get married or become pregnant as a marketing staff of the bank. She was sacked in March 2022 when she became heavy with her pregnancy.