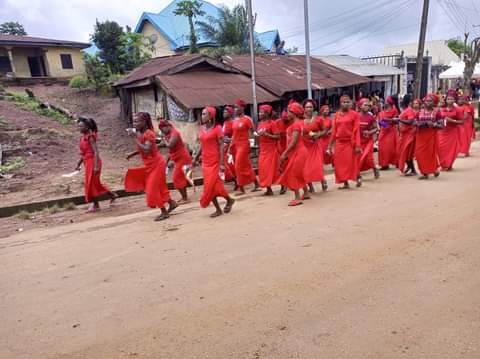 For the people of Nguzu Edda in Afikpo South Local Government Area of Ebonyi State, one of the major highlights of their annual New Yam Festival is the promotion of the sanctity of virginity for young ladies and their preparation for marriage.

On the third day of the celebration, young men who are searching for fiancees would, in excitement, wait to see an array of virgins, who are ripe for marriage.

The virgins would throng the public square in a unique cultural dance contest during which prospective suitors would make advances to ladies of their choice.

Before the festival commences, the maidens would have been tutored on home management, conjugal obligations and care for husbands.

It is a taboo to the people of Nguzu Edda for non-virgins to participate in the dance of the ripe virgins. The Point learnt that the culture is crucial to the people as it sets them apart from other communities.

Clad in traditional attires with beautiful homemade make-ups on their faces, the virgins would dance to local songs as villagers and dignitaries watched them with excitement.

Every maiden in the community strives to keep her virginity to earn the honour being bestowed on the virgins at the event. This, elders in the community said, kept the young ladies chaste against the prevailing immorality in modern day.

This year’s festival witnessed a large turnout of villagers, both young and old. Some of the natives exhibited the diverse rich culture of the whole land. The men participated in a traditional engagement called the ‘Igba Nzzu’ and other rituals that add colour to the day.

In an interview, one of the villagers, Kalu Ukpa Enya, said that the festival is being celebrated in 72 villages in Nguzu Edda. According to him, the festival is a meeting point for friends and well-wishers.

Chimaobi Ugwuocha stated that the celebration was popular for fostering peace and unity within the various communities in Nguzu Edda. He explained that both
Christians and traditional worshippers usually gather to celebrate the annual festival.

The Commissioner for Housing and Urban Development, Sunday Ugwuocha; and the Chairman of Nguzu Edda General Assembly, Okoro Agwu, stated that the new yam festival afforded them the opportunity to commune with the gods of land and also to celebrate their unique cultural identity.

In addition, Ugwuocha said that the festival marked the end of the year and the beginning of another year.

“It is a four-day-event starting from Nkwo ikelata Jii. It is the day people go to farm and harvest yam.

“The second day is Eke-ikpoit, a day we have communion with the gods when kindred will donate a tuber of yam for porridge. Kindreds are expected to deep hands into the pot and eat. It implies that no one bears grudges against another.

“The third day is Orie, when virgins and maidens dance and prospective suitors come around and seek their hands in marriage. If you are not a virgin, you are not expected to dance there or you face the consequence. The fourth day is Afor Nzzu, the grand finale,” he said.